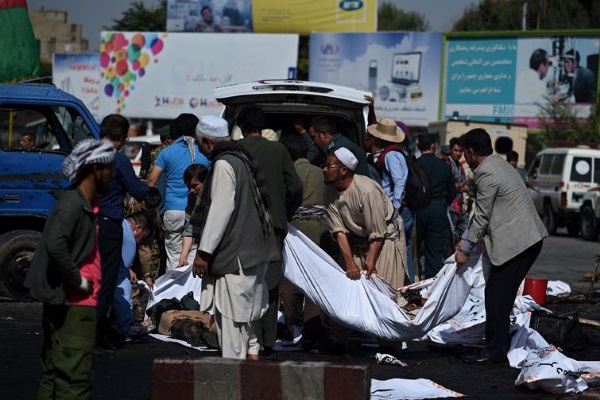 Afghan volunteers carry the bodies of victims at the scene of a suicide attack that targeted crowds of minority Shiite Hazaras during a demonstration at the Deh Mazang Circle of Kabul on July 23,2016. A powerful explosion on July 23, ripped through crowds of minority Shiite Hazaras in Kabul who had gathered to protest over a power line, killing at least 20 people and leaving 160 others wounded, officials said. No group has so far claimed responsibility for the blast, but it comes in the middle of the Taliban's annual summer offensive, which the insurgents are ramping up after a brief lull during the recent holy fasting month of Ramadan. The scene of the blast was littered with charred bodies and dismembered limbs, with ambulances struggling to reach the scene as authorities had overnight blocked key intersections with stacked shipping containers to impede movement of the protesters. / AFP / WAKIL KOHSAR

ISLAMABAD, PAKISISTAN – The ISIS terror group claimed credit for a bomb attack in Kabul on Saturday that killed at least 80 people and wounded 231 others during a protest rally.

An Afghan Interior Ministry statement said three suicide bombers attacked the peaceful demonstration. It said one of them detonated his device among the protesters, one mistakenly killed only himself, and  a third was shot dead by security forces guarding the rally.

A website linked to ISIS claimed responsibility for the violence. A statement said the attack was meant to warn Afghanistan’s ethnic Hazaras, who are mostly Shi’ite Muslims, to stop joining the Syrian government in its fight against the terror group.

Rights groups and analysts have accused Iran of covertly recruiting and training men from the estimated 3 million Afghan refugees it hosts and sending them to Syria to fight alongside government forces.

President Ashraf Ghani condemned the violence as the work of “terrorists and opportunists,” saying the government put in place measures to provide security for the protesters.

“But terrorists entered the protests and carried out explosions that martyred and wounded a number of citizens, including members of security and defense forces,” he said.

Later in the evening, addressing a gathering in the palace of mainly Hazara leaders, Ghani ordered an investigation into the attack and declared Sunday as a national mourning day to offer special prayers for the victims in the mosques.

The attack targeted a rally of thousands of ethnic Hazaras who were demanding that the government reroute a planned power line through their poverty-stricken central province of Bamiyan.

Ahead of Saturday’s rally, authorities had blocked major roads in the capital to prevent protesters from reaching the city’s center or the presidential palace. The measures severely restricted movement, forcing shops and businesses to close. It also hampered the ability of rescue workers to reach victims of the attack.

That led some rally participants to accuse the government of either playing a role in the attack or allowing it to take place through negligence.

Atiq Jafari, a member of the Enlightenment Movement, which has demanded the government reroute the planned power line, said Afghan forces failed to protect the protesters and some ran away soon after the blast occurred.

“The government is responsible for the provision of security for its citizens and it has failed to do so,” Jafari said.

A spokesman for Ghani told VOA that the attack was an example of how militant groups are picking soft targets to discredit the government.

“We had concerns about the attacks and shared our concerns with the protesters,” said Dawa Khan Menapal. “We had taken every possible security measure, but the attackers had burkas on, which made it difficult for the security forces to prevent.”

The United Nations, Pakistan’s Foreign Ministry and the U.S. Embassy in Kabul each released statements condemning the attack.

“This attack is particularly heinous because it targeted civilians as they exercised their rights to freedom of assembly and freedom of expression,” said Tadamichi Yamamoto, head of the U.N. Assistance Mission in Afghanistan. He reiterated that an attack deliberately targeting a large, concentrated group of civilians amounted to a war crime.

Amnesty International said the bombing of a peaceful protest demonstrated “the utter disregard that armed groups have for human life.”

In May, the Hazara community organized a similar mass demonstration against the current route of the multimillion-dollar TUTAP regional electricity line involving Turkmenistan, Uzbekistan, Tajikistan, Afghanistan and Pakistan. The original plan was to route the so-called TUTAP line through Bamiyan, a mostly Hazara region, but then the path was changed so that it would go through the Salang Pass, the route connecting northern and southern Afghanistan, before reaching Kabul.