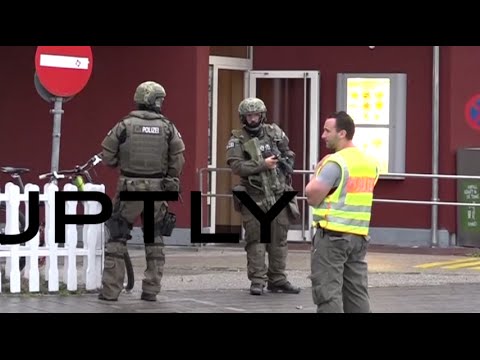 As police hunt those responsible for a deadly shooting rampage at a shopping mall in Munich, they are already calling it a terror attack.

On Twitter, Munich police said six people are dead and an unknown number  wounded after shots were fired at the Olympia Shopping Center Friday evening.

“The shooter or shooters are still on the run” either in or around the mall, Munich police spokeswoman Claudia Kuenzel told the Associated Press.

“There is a major police operation under way in the shopping center,” Munich police said on Twitter.

There are no details on who was responsible for the shooting.

Munich police posted a message on Facebook and Twitter directing people to remain in their homes or seek shelter in nearby buildings.  They also directed people not to share images of police activity on social media.

Please don’t take Fotos or Video of Police Action in order to avoid any helpful Information for the suspects. #munich #gunfire #oez

“We don’t yet know exactly what’s happening there, but obviously our hearts go out to those who may have been injured,” President Obama said, speaking at the White House. “We are going to pledge all the support they may need.”

The U.S. State Department advised U.S. citizens in Munich to shelter in place and to contact loved ones to let them know they are safe.

“We’ve seen initial reports about a shooting at a shopping center in Munich, Germany,” said State Department Spokeswoman Elizabeth Trudeau. “Our thoughts are with the victims and their families. We’re following the situation closely here at the department and we are working with local authorities to determine if any U.S. citizens have been impacted.”

Second attack in a week

Friday’s attack took place a week after a 17-year-old Afghan refugee attacked passengers with an axe on a train in Wurzburg, Germany, wounding four people, before police shot him dead. Islamic State claimed responsibility of the attack.

In late June, a masked man opened fire at a German movie complex in the western town of Viernheim near Frankfurt, wounding several people. Special police officers shot him dead after storming the complex where the gunman had taken several hostages. All of whom escaped uninjured.