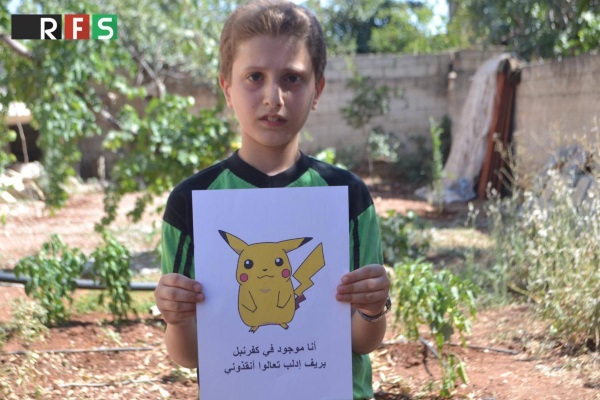 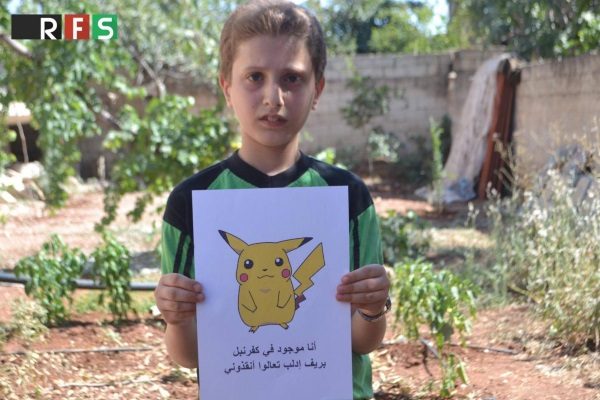 Photos of Syrian children holding pictures of Pokemon characters and asking the world to save them have been circulating the internet.

The images, published on Facebook, show young Syrians looking dejectedly into the camera holding images of Pokemon characters with the words: “I am here, come save me”.

The signs also state the location of each child. They are all in different Syrian towns.

The photos were posted by the Revolutionary Forces of Syria Media Office (RFS), a media outlet for the working to spread the messages of Syrians against Bashar al-Assasd’s presidential regime.

A spokesperon for RFS, which is based in Turkey and has reporters in Syrian cities, told The Independent: “With the media spread wide for Pokemon game we decided to publish these images to highlight the suffering of the Syrian people from the bombing of the forces of order and Air-Assad to the Syrian people and besiege them.

“We want to raise awareness and draw attention to the plight of Syrian children in besieged areas and the suffering of Syrian people who are attacked and killed by the Assad regime and its allies.”

The images have been circulated more than 21,500 times.

#PrayForSyria
I am from #Syria come to save me!!! pic.twitter.com/lRbSlGsWrB

The photos have also been shared on Twitter, with one user describing it as “the Pokemon game you have not seen before”.

Since Pokemon Go became an international craze, people have expressed frustration that more attention is not being paid to the suffering  in Syria, where a war has raged since 2011 – leaving hundreds of thousands dead and forcing millions to flee their homes.

“If only augmented reality could save lives here is Syria.”

The images were published after more than 50 civilians were killed by air strikes in northern Syria, the majority of them women and children.

The RFS spokesperson added: “Syrian children are victims of the war and the brutal and indiscriminate attacks that are carried out on a daily basis by regime and Russian jets.

“The Syrian children are paying the price for the international inaction to stop the Assad killing machine.”

Unicef has said it estimates 35,000 children are trapped in and around the Syrian city of Manbij, where the air strikes hit.