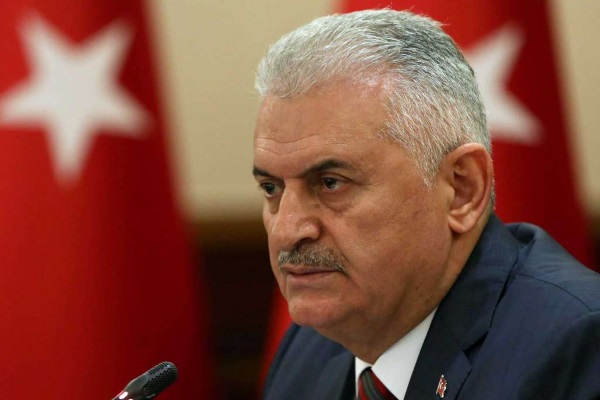 Following criticism from the United States and other western leaders, Turkish Prime Minister Binali Yildirim on Tuesday cautioned people against seeking revenge for the failed coup attempt against his government.

“Nobody can have a feeling of revenge. This is unacceptable in a state governed by rule of law,” Yildirim said as he called for “brotherhood” following the attempted coup.

Even as he called for unity, Yildirim said he would remove the movement of U.S.-based cleric Fethullah Gulen, the man blamed for masterminding the coup attempt, “by its roots” so it can never betray the Turkish people again.

The United States is urging Turkey to exercise restraint and act within the rule of law as it investigates last week’s failed coup.

In Brussels Monday, U.S. Secretary of State John Kerry said he supported bringing perpetrators of the attempted coup in Turkey to justice, but warned the government against going “too far” while restoring order in the country.

At the White House, spokesman Josh Earnest stressed U.S. support for Turkey’s “democratically elected” government and said Washington strongly values “the important relationship” with its NATO ally. But he said the government should “be supportive of due process and freedoms that are outlined in the Turkish constitution that include freedom of speech, freedom of press and freedom of assembly.”

Yildirim said he had dispatched several dossiers to the U..S requesting Gulen’s extradition after Kerry said the U.S. would require evidence before considering sending Gulen back to Turkey.

“We have sent four dossiers to the United States for the extradition of the terrorist chief. We will present them with more evidence than they want,” Yildirim told parliament.

The state-run Anadolu news agency reported that 8,777 officers have been suspended and 6,000 members of the judiciary and military have been detained following the attempted coup Friday, sparking concern from world leaders who warn against actions that would damage constitutional order.

U.N. High Commissioner for Human Rights Zeid Ra’ad al-Hussein called for international observers to be stationed at detention centers to make sure those accused of being involved in the coup attempt have access to lawyers and their families.

“In the aftermath of such a traumatic experience, it is particularly crucial to ensure that human rights are not squandered in the name of security and in the rush to punish those perceived to be responsible,” Zeid said in a statement. “Reintroduction of the death penalty would be in breach of Turkey’s obligations under international human rights law — a big step in the wrong direction,” he said.

Erdogan said Sunday he is receptive to reinstating the country’s death penalty in the aftermath of the coup attempt. But EU foreign policy chief Federica Mogherini warned that such a step may end Turkey’s EU membership hopes.

“Let me be very clear,” she said. “No country can become an EU state if it introduces the death penalty.”

Turkey hasn’t executed anyone since 1984, and capital punishment was legally abolished in 2004 as part of Turkey’s bid to join the European Union.

In Germany, a spokesman for Chancellor Angela Merkel stressed that the EU is a “community of laws and values” with which the death penalty was not compatible.

Erdogan has promised to rid Turkey of people involved in the coup attempt. “At every level of government, the period of cleaning this virus will continue,” Erdogan said. “Like the cancer virus, it spreads all around the government.”

Justice Minister Bekir Bozdag says Turkish authorities are accelerating arrests of people, which have included judges, military officers and soldiers. Those in custody include the commander of the Third Army Corps, General Erdal Ozturk, who could face charges of treason.

Anadolu reported Tuesday that 85 high-ranking military officials have been jailed pending their trials related to the coup attempt, and dozens more are awaiting questioning.

According to Anadolu, those formally arrested include former air force commander Gen. Akin Ozturk, alleged to be the ringleader of the July 15 uprising, and Gen. Adem Hududi, commander of Turkey’s 2nd Army, which is charge of countering possible threats to Turkey from Syria, Iran and Iraq.

Ozturk has denied the allegation, saying he neither planned nor directed the coup.

Other high-ranking military officials flew to neighboring Greece by helicopter and requested political asylum. Turkish media reports say some of those who fled are believed to be among the architects of the coup.

On Thursday, a court in Athens will decide whether or not to send the military officials back to Turkey for punishment.