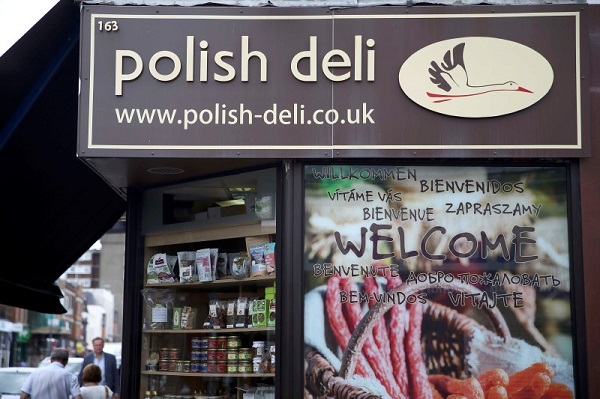 LONDON (Reuters) – Polish and Muslim leaders in Britain expressed concern on Monday after a spate of racially motivated hate crimes following last week’s vote to leave the European Union in which immigration was widely regarded as a key factor in the outcome.

Police said offensive leaflets targeting Poles had been distributed in a town in central England, and graffiti had been daubed on a Polish cultural center in London on Sunday, three days after the vote.

Meanwhile, Islamic groups said there had been a sharp rise in incidents against Muslims since last Friday, many of which were directly linked to the decision for a British exit, or Brexit.

Prime Minister David Cameron condemned the attacks in parliament and said he had spoken to the Polish counterpart Beata Szydlo to express his concern and to reassure her Poles in Britain would be protected.

“In the past few days we have seen despicable graffiti daubed on a Polish community center, we’ve seen verbal abuse hurled against individuals because they are members of ethnic minorities,” Cameron said.

“We will not stand for hate crime or these kinds of attacks. They must be stamped out,” he added.

Immigration emerged as one of the key themes of the EU referendum campaign, with those who backed a British exit arguing membership of the bloc had allowed uncontrolled numbers of migrants to come to Britain from eastern Europe.

A few days before the vote, Sayeeda Warsi, a former minister in Cameron’s ruling Conservative Party, quit the Brexit campaign accusing it of spreading lies, hatred and xenophobia.

There has been a large Polish community in Britain since World War Two and that number has grown after Poland joined the EU in 2004. There are about 790,000 Poles living in Britain according to official figures from 2014, the second-largest overseas-born population in the country after those from India.

Cambridgeshire Police said they were investigating after offensive leaflets were left on cars and delivered to homes in Huntingdon. According to the local paper, the Cambridge News, the cards, which had a Polish translation, read: “Leave the EU/No more Polish vermin”.

At the Polish Social and Cultural Association in London, which opened in 1974 and is home to the majority of Britain’s Polish organizations, graffiti was painted on the side of the building calling on Poles to leave the United Kingdom.

“This is an outrageous act that disgusts not only me and the Polish community but everyone in Hammersmith &amp; Fulham,” local lawmaker Andy Slaughter said on Twitter.

The Muslim Council of Britain, an umbrella group for many of the organizations which represent the country’s 2.7 million Muslims, said more than 100 hate crimes had been reported since the result of the referendum.

“Our country is experiencing a political crisis which, I fear, threatens the social peace,” said Shuja Shafi, the MCB Secretary General.

Fiyaz Murghal, the founder of a group which monitors attacks on Muslims, said it had received details of some 30 incidents including a Muslim councillor in Wales who was told to pack her bags and two men shouting “We voted for you being out” at a Muslim woman wearing a hijab as she went to a mosque in London.

“The Brexit vote seems to have given courage to some with deeply prejudicial and bigoted views that they can air them and target them at predominantly Muslim women and visibly different settled communities,” Murghal said.