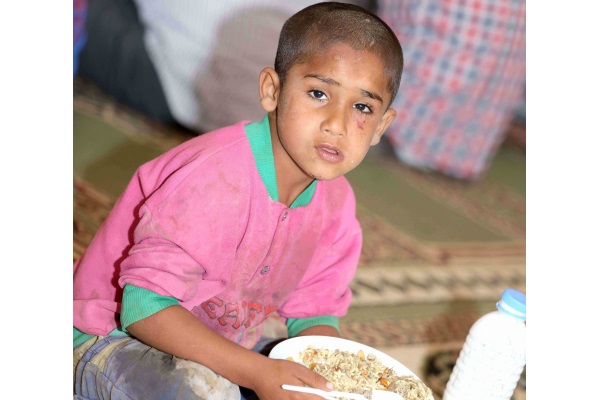 If there is one physical experience the fasting believer gets greatly familiar with during the month of Ramadan it’s hunger.

Yet while the hunger may be universal to those who fast, the joy and relief of an iftar after sundown is not nearly as universal an experience.

According to the UN, some 800 million people go to bed each night hungry which works out to 1 in 9 people on the planet.

Can you imagine not having an ample iftar, or basic meals to look forward to every or most days of the year?

These are not new realities but are part of the nature of this world which is an abode of tests. How we respond to trials like hunger and wealth are strong indicators of our faith or lack thereof! Allah, Most High, says:

“Seest thou one who denies the Judgment (to come)? Then such is the (man) who repulses the orphan (with harshness), And encourages not the feeding of the indigent.” (Quran 107:1-3)

Imam Razi explains in his Tafsir:

“…the associating of “feeding” with “indigent” shows that such feeding is the right of the poor. So it is as though that person has denied the poor his right which is an indicator of the extent of his meanness, hardheartedness, and vile nature. The other meaning of this verse is that he does not encourage others to feed the poor because he doesn’t regard doing so to be of benefit. The main point is that Allah has made the tendency to harm the weak, and hold back (oneself or others) from such basic good an indicator of disbelief in the Day of Judgment…” (Mafatih al-Ghayb, Razi)

That one verse alone with such a powerful indicator of the link between feeding the poor and the essence of faith in Allah and Judgment Day should be enough for the believer to recognise the virtue and importance of Zakat, Zakat/Sadaqtul Fitr, charity in general, and feeding the poor and hungry. Yet there are many other such verses like Allah’s praise of “…the giving of food (to the poor) in a day of privation…” (Quran 90:14) thereby indicating the beloved status of feeding the poor even in times of difficulty.

Due to the dearness of feeding the poor to Allah, Most High, many authentic reports from the Messenger of Allah (peace be upon him) attest to its merit such as his saying, “Feed the hungry, visit the sick, and free the captive.” (Bukhari) and “Worship the All-Merciful, distribute food, spread the greeting of peace, and enter Paradise in peace.” (Tirmidhi)

For all of these reasons connected to the genuine need of the poor and their right on those who are better off, Human Appeal International has special Ramadan programs that provide an opportunity for those who yearn for the pleasure of Allah and who would like to make a difference in the world to strive to do just that in this blessed month. See all the programs here or click the following links for individual campaigns: Zakat in Ramadan, Zakat/Sadaqtul Fitr, Sadaqa in Ramadan, and feeding the hungry in Ramadan. May Allah accept from us all.

This is the second in a weekly series brought to you by Human Appeal International Australia during this blessed month to highlight merits of the month and remind ourselves of specific ways our charity and prayers can be put to use in seeking the pleasure of Allah, Most High.