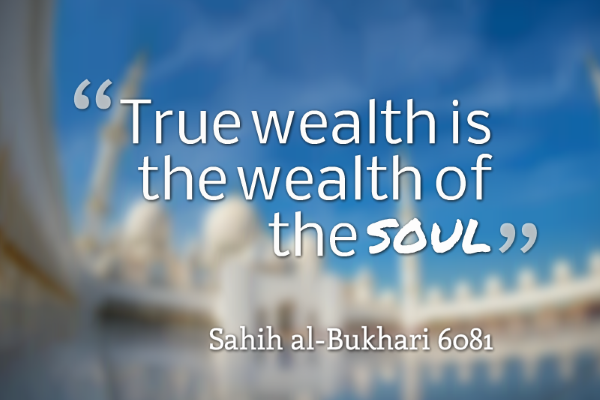 The basis of many spiritual problems, unrest, and hardness of heart lies in forgetting the Hereafter and becoming preoccupied with this world. Many poor people torture themselves to become rich; and many wealthy torture themselves with the ambition to earn more. People lust for the temporal pleasures of this world without thinking about what is the source and meaning of them.

It should not be forgotten that contentment is the real wealth.

The Prophet (pbuh) states that:

When the Prophet (pbuh) is asked the meaning of the word “expand” in the verse “Therefore (for) whomsoever Allah wills to guide, He expands his breast for Islam…” (6; 125), he said that:

“When light goes into a heart, the chest opens and expands for it.” When he (pbuh) was asked if there were any signs of this expansion, he replied:

“Yes, there are. To turn one’s face away from this world, which is the place of deception, and to the Hereafter, or the eternal life, and get ready for death before it comes.” (Ghazālī, Iḥyā, IV, 406-7)

In another tradition, the Messenger of Allah (pbuh) says that:

“Allah the Almighty subjects the person who prefers this world over the Hereafter to three afflictions: unceasing worry placed in his heart; poverty, which he cannot get rid of; and insatiable greed.” (Ghazālī, Ihyā, IV, 411)