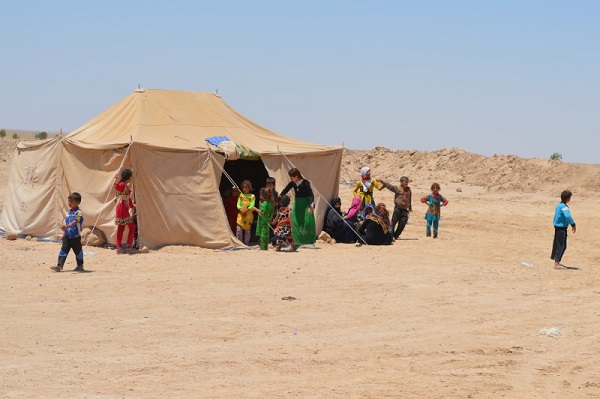 Civilians who fled their homes due to the clashes in Falluja, gather on the outskirts of Falluja, May 26, 2016. REUTERS/Stringer

By: Haider Kadhim and Saif Hameed

GARMA VILLAGE, Iraq (Reuters) – Desperate for food and water, residents are fleeing the Iraqi city of Falluja as Islamist militants seek to fend off an assault by the army, only for hundreds to be detained by the authorities on suspicion of siding with those they are escaping.

A week after Baghdad announced the start of its offensive on Falluja, its troops advanced into the city limits for the first time on Monday, pouring into rural territory on its southern outskirts but stopping short of the main built-up area.

By Wednesday, Iraqi Prime Minister Haider al-Abadi called a pause to the advance because of concerns about the safety of the tens of thousands of people still believed trapped inside.

Residents who fled Falluja ahead of the army’s attack and were sheltering in a village school nearby said that while they are glad to escape Islamic State militants, they now feared for hundreds of men and boys detained by the army.

“Don’t treat us like we are Daesh,” said 54-year-old Mahdi Fayyadh, using an Arabic acronym for Islamic State, also known as ISIS or ISIL.

Fayyadh, who lost a leg to diabetes while under Islamic State’s rule due to a lack of medication, said he fled the city with 11 family members after the assault began.

His relatives helped him to walk on crutches. But once they reached army lines, the other men in the group were separated from the rest and detained. He was left vulnerable, with nobody to help him walk.

“I already lost a leg,” Fayyadh said, a battered pair of crutches leaning against his shoulder. “I ask all the good people to not treat us like they (the militants) treated us.”

The government says it has no choice but to screen fleeing men and boys to prevent Islamic State fighters from escaping among civilians, and that it carries out the screening as quickly and with as much care for those detained as is possible on the battlefield.

The United Nations said on Tuesday around 500 men and boys over 12 years old from Falluja were being held by the authorities, in a screening process meant to take up to seven days. About 30 were released on Monday, it said.

Conditions in detention centers in Anbar province are known to be squalid. Last month, London-based human rights watchdog Amnesty International said people as young as 15 were being held in “inhumane and degrading conditions”.

Fayyadh said he just hoped his detained relatives’ screening would be over soon so they could together leave the school where he was housed in Garma, a village east of Falluja. The authorities are using the school to shelter 1,500 refugees.

“I hope that the security commanders hurry up with the security screening of my relatives, so that we can move to other areas that have services and we don’t stay here crowded with little food and medicine,” he said.

Falluja, where U.S. troops fought their biggest battles after the invasion of Iraq in 2003, is the militants’ closest stronghold to Baghdad, and thought to be the base for their campaign of suicide bombings on the capital less than an hour’s drive away. It was the first Iraqi city where Islamic State raised its flag in 2014, before sweeping through most Sunni Muslim parts of the country in the months that followed.

The Shi’ite-led Baghdad government faces the task not only of driving out the militants but of winning over the overwhelmingly Sunni Muslim population.

Shi’ite militias assisting the army in its offensive have said they will take part only in the encirclement of Falluja, to avoid fanning sectarian tension.

Government forces and allies began a siege on the city six months ago during which the humanitarian situation has deteriorated. Now they have begun to try to retake Falluja, the United Nations has warned that tens of thousands are trapped inside, lacking food, drinking water and medicine.

The United Nations says the militants are forcing civilians to serve as human shields, a tactic they have employed in other locations in Iraq. At least 20,000 children are trapped inside the city, facing the risks of forced recruitment or separation from their families, the United Nations said. [L8N18T0D9]

At the shelter in Garma, some escaped residents said they had been forced apart from their relatives by the militants.

Holding a baby in her arms, 40-year-old Umm Salam said Islamic State fighters had used the men of her village as human shields as the army closed in on them last week.

The militants moved her and her family to another house in the village, Umm Salam said. “We remained trapped in the house for five days without food.”

They were freed when Iraqi security forces captured the village.

Hassan Farhan Salih, a 45-year-old school head, said that as shortages in Falluja become more acute in recent months, militants had pressured residents to provide them with money and food.

“They demanded produce from farmers and cattle from herders,” he said. A group of older men sitting with Salih inside the Garma school nodded in agreement.

Once the militants took $4,000 from him with which he was going to pay for a used car, he said.

The unfolding offensive could determine the fate of Iraqi Prime Minister Haider al-Abadi, whose government is in turmoil as months of political deadlock drag on. He has repeatedly promised that civilians would not be harmed.

The fate of those taken by Islamic State is more uncertain than those being held by the authorities. Umm Salam does not know if she will see her male relatives again.

“We don’t know if they’re alive or dead.”