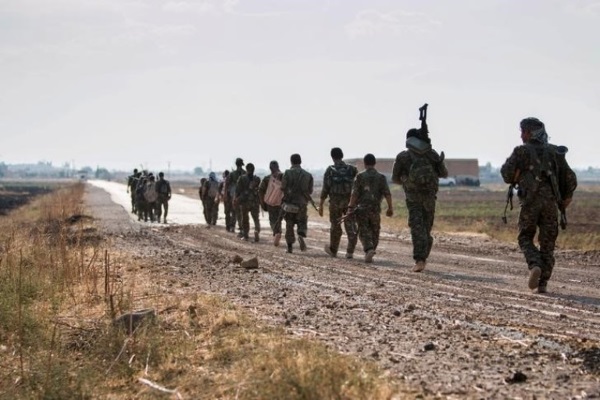 Kurdish fighters walk carrying their weapons towards Tel Abyad of Raqqa governorate after they said they took control of the area June 15, 2015. REUTERS/Rodi Said

RAQQA PROVINCE, SYRIA/WASHINGTON – U.S.-backed forces on Friday advanced deeper into areas of north of Raqqa, continuing their march to the edge of the de facto capital of Islamic State (ISIS/IS) in Syria.

On the fourth day of the offensive, the Syrian Democratic Forces, an alliance of Kurdish and Arab fighters, took control of at least 10 villages and advanced 15 kilometers southward as U.S.-led coalition airstrikes targeted positions in nearby localities.

“The process is ongoing,” Rojda Judi, a female Kurdish commander who leads the operation on the ground, told VOA. “But the only thing that is slowing us is IS has left so many mines behind. We have to clear off any area before we fully step in.”

The Kurdish-led SDF aims to close in on IS by surrounding IS-held territories from different directions, local officials said.

“We are fighting Daesh on three fronts in northern Raqqa,” said Naser Mansoor, a Kurdish official in Syria, using the Arabic name for IS.

“In some areas they [IS] just retreat, and in other areas they stay to fight,” he told VOA via phone from Syria. “But we have killed dozens of them so far.”

Mansoor said that the level of coordination between the international coalition and local forces had been advanced and that coalition airstrikes were key to undermining IS on the ground.

A VOA reporter embedded with the SDF on the front line said that anti-IS forces are using midrange and heavy weapons against the militants. IS is firing back, using mortar rounds.

While the ongoing battles are some 40 kilometers away from Raqqa, IS is preparing for battle inside the city by digging trenches and building berms, local news reports said Friday.

IS has been in control of Raqqa since 2014, shortly before it declared its Islamic caliphate in Syria and Iraq.

Military leaders say it will most likely take weeks before the local forces are able to approach the city limits.

The SDF, mostly made up of Syrian Kurds and numbering at least 25,000 fighters, is fighting with a smaller element of Syrian Arabs, numbering perhaps 5,000 to 6,000. The U.S. is trying to increase the Arab numbers.

But U.S. officials have been tamping down expectations of rapid progress. And a European diplomat told VOA this week that the plan is to try to encircle much of the city of Raqqa, at least to take outlying villages north, west and south.

“The Arab fighters are not sufficient in numbers, nor do they have the capabilities to take on the hardened IS fighters defending the city,” he said. “And the Kurds can’t be in the vanguard in capturing Raqqa.”