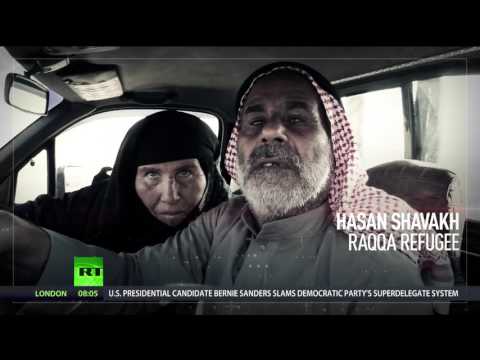 GAZIANTEP, TURKEY – U.S.-led coalition warplanes carried out intense airstrikes Tuesday on Raqqa, the de facto Syrian capital of the Islamic State group, a monitoring group said, continuing days of air-raids that appear to be aimed at demoralizing jihadist fighters before an offensive by Kurdish-led forces on villages to the north of the city.

The airstrikes appear targeted mostly on IS defensive positions on the outskirts of the city. This may be to try to avoid civilian casualties, although civilian deaths have been reported.

Raqqa political activists have been warning that IS is using civilians as human shields, spreading fighters and their weaponry around civilian areas and housing militants in residential blocks.

Leaders of the U.S.-backed Syrian Democratic Forces (SDF), a Kurdish-dominated coalition that also includes a mixed bag of small Sunni Arab armed groups and some Syriac and Turkmen community defense forces, announced Tuesday it had started an offensive to liberate Raqqa from the Islamic State.

SDF spokesmen said U.S. commandos are embedding with their fighters in the offensive and posted videos purportedly showing this. U.S. officials deny American soldiers are taking on combat roles in the fighting and insist U.S. Special Forces won’t be exchanging fire with IS.

Colonel Steve Warren, the spokesman for the U.S.-led international coalition against IS, says U.S. Special Forces personnel are only providing assistance and advice to the SDF in the battle, but they are not on the front line. “We are in their off centers and headquarters providing advice,” he said.

U.S. officials, and some Kurdish officials, are also cautioning the objective of the military operation is to seize villages and territory north and west of Raqqa rather than to seek to retake the beleaguered city. The objective, they say, is to squeeze the city and further isolate it.

Some Western officials concede the SDF doesn’t have the capability yet to mount a full-scale assault on the city. That has prompted political activists to question why the international coalition has been air-dropping leaflets in the past few days on Raqqa urging civilians to flee the city, implying that an assault is in the offing.

“The time you have been waiting for has come, the time to leave Raqqa,” the flyers read. The leaflets depict three men and a woman with a child escaping urban ruins and heading to a peaceful landscape with the sun shining through clouds. Activists say the coalition is sowing panic among civilians and risks alienating them. There are reports some civilians have volunteered to help defend the city.

“If the international coalition wants to ask the people of Raqqa and its suburbs to leave their cities and towns, they should first provide havens and safe roads to secure civilians,” said Hamoud Almousa, an activist with the anti-IS network Raqqa is Being Slaughtered Silently.

He says it appears locals fear the YPG as much as IS.

The Syrian Observatory for Human Rights, a British-based monitoring group that relies on a network of activists inside Syria, reported Wednesday sharp clashes between SDF and IS forces around villages close to Ain Issa, 56 kilometers north of Raqqa. The monitoring group also said dozens of civilians left Raqqa city Wednesday and headed into the western countryside.

Meanwhile, Turkish military officials have warned their U.S. counterparts that Turkey will not accept American-backed Kurdish-led forces crossing the Euphrates River to mount assaults on two other IS-held towns, Manbij and Jarabulus.

Reports recently suggested the Turks may have been reducing their objections to Kurdish-led forces moving west of the Euphrates, but in a meeting with General Joseph Votel, head of U.S. Central Command, deputy chief of the Turkish general staff Yaşar Güler warned Turkey still considers the Azaz-Jarablus line as a “red line” when it comes to the Kurdish-led forces.

According to Turkish media reports, Güler urged the American commander to provide more support for Syria’s mainstream rebel militias in the Free Syrian Army so they can seize IS-controlled towns west of the Euphrates.

“An important threat will disappear if you provide support to the moderate opposition rather than the PYD to clear this line of ISIS,” Güler was reported as saying.

Votel made a surprise trip to Syria over the weekend to confer with SDF leaders. The visit, which many observers dubbed a PR exercise, prompted the anger of mainstream Syrian rebel commanders, who accuse the Obama administration of giving up on the Syrian revolution. Votel told reporters who accompanied him on the 11-hour trip that he had increased confidence in the SDF’s capabilities.