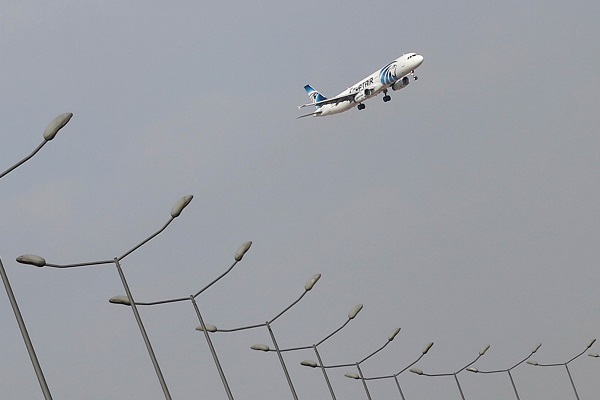 An EgyptAir plane lands at Cairo Airport in Egypt May 19, 2016. REUTERS/Amr Abdallah Dalsh

CAIRO/ATHENS (Reuters) – An EgyptAir jet carrying 66 passengers and crew from Paris to Cairo disappeared from radar over the Mediterranean south of Greece on Thursday, with Athens saying the plane swerved in mid-air before plunging from cruising height and vanishing.

Greek state television said aircraft debris had been found in the sea during a search for the missing Airbus A320. Earlier, Greek officials said pieces of plastic and two lifevests were found floating some 230 miles south of Crete.

Officials were reluctant to speculate over the disappearance while the search was underway. Egyptian Prime Minister Sherif Ismail said it was too early to rule out any explanation, including an attack like the one blamed for bringing down a Russian airliner over Egypt’s Sinai peninsula last year.

But despite the caution, the country’s aviation minister said a terrorist attack was more likely to have taken down the aircraft than a technical failure.

In Washington, U.S. President Barack Obama received a briefing on the disappearance from his adviser for homeland security and counter-terrorism, the White House said.

In Athens, Greek Defence Minister Panos Kammenos said the Airbus had first swerved 90 degrees to the left, then spun through 360 degrees to the right. After plunging from 37,000 feet to 15,000, it vanished from Greek radar screens.

Greece deployed aircraft and a frigate to the area to help with the search. Greek defense sources told Reuters earlier that two floating objects, colored white and red, had been spotted in a sea area 230 miles south of the island of Crete.

According to Greece’s civil aviation chief, calls from Greek air traffic controllers to the jet went unanswered just before it left the country’s airspace, and it disappeared from radar screens soon afterwards.

There was no official suggestion of whether the disappearance was due to technical failure or any other reason such as sabotage by ultra-hardline Islamists, who have targeted airports, airliners and tourist sites in Europe, Egypt, Tunisia and other Middle Eastern countries over the past few years.

The aircraft was carrying 56 passengers – with one child and two infants among them – and 10 crew, EgyptAir said. They included 30 Egyptian and 15 French nationals, along with citizens of 10 other countries.

Asked if he could rule out that terrorists were behind the incident, Prime Minister Ismail told reporters: “We cannot exclude anything at this time or confirm anything. All the search operations must be concluded so we can know the cause.”

French President Francois Hollande also said the cause was unknown. “Unfortunately the information we have … confirms to us that the plane came down and is lost,” he said. “No hypothesis can be ruled out, nor can any be favored over another.”

With its archeological sites and Red Sea resorts, Egypt is traditionally a popular destination for Western tourists. But the industry has been badly hit following the downing of the Russian Metrojet flight last October, killing all 224 people on board, as well as by an Islamist insurgency and a string of bomb attacks.

Greek air traffic controllers spoke to the pilot as the jet flew over the island of Kea, in what was thought to be the last broadcast from the aircraft, and no problems were reported.

But just ahead of the handover to Cairo airspace, calls to the plane went unanswered, before it dropped off radars shortly  after exiting Greek airspace, Kostas Litzerakis, the head of Greece’s civil aviation department, told Reuters.

“During the transfer procedure to Cairo airspace, about seven miles before the aircraft entered the Cairo airspace, Greek controllers tried to contact the pilot but he was not responding,” he said.

Greek authorities are searching in the area south of the island of Karpathos, Defence Minister Kammenos told a news conference.

“At 3.39am (0039 GMT) the course of the aircraft was south and south-east of Kassos and Karpathos (islands),” he said. “Immediately after, it entered Cairo FIR (flight information region) and made swerves and a descent I describe: 90 degrees left and then 360 degrees to the right.”

“NO ONE KNOWS ANYTHING”

At Cairo airport, authorities ushered families of the passengers and crew into a closed-off waiting area.

Ayman Nassar, from the family of one of the passengers, also  walked out of the passenger hall with his daughter and wife in a distressed state. “They told us the plane had disappeared, and that they’re still searching for it and not to believe any rumors,” he said.

A mother of flight attendant rushed out of the hall in tears. She said the last time her daughter called her was Wednesday night. “They haven’t told us anything,” she said.

In Paris, a police source said investigators were now interviewing officers who were on duty at Roissy airport on Wednesday evening to find out whether they heard or saw anything suspicious. “We are in the early stage here,” the source said.

Airbus said the missing A320 was delivered to EgyptAir in November 2003 and had operated about 48,000 flight hours.

The missing flight’s pilot had clocked up 6,275 hours of flying experience, including 2,101 hours on the A320, while the first officer had 2,766 hours, EgyptAir said.

At one point EgyptAir said the plane had sent an emergency signal at 04:26 a.m., two hours after it disappeared from radar screens. However, Fathi said later that further checks found that no SOS was received.

The weather was clear at the time the plane disappeared, according to Eurocontrol, the European air traffic network.

“Our daily weather assessment does not indicate any issues in that area at that time,” it said.

Under U.N. aviation rules, if the aircraft is found to have crashed in international or Egyptian waters, Egypt will automatically lead an investigation into the accident assisted by countries including France, where the jet was assembled, and the United States, where engine maker Pratt &amp; Whitney is based.

Russia and Western governments have said the Metrojet plane that crashed on Oct. 31 was probably brought down by a bomb, and the Islamic State militant group said it had smuggled an explosive device on board.

That crash called into question Egypt’s campaign to eradicate Islamist violence. Militants have stepped up attacks on Egyptian soldiers and police since Sisi, then serving as army chief, toppled elected President Mohamed Mursi, an Islamist, in 2013 after mass protests against his rule.

In March, an EgyptAir plane flying from Alexandria to Cairo was hijacked and forced to land in Cyprus by a man with what authorities said was a fake suicide belt. He was arrested after giving himself up.

EgyptAir has a fleet of 57 Airbus and Boeing jets, including 15 of the Airbus A320 family of aircraft, according to airfleets.com.