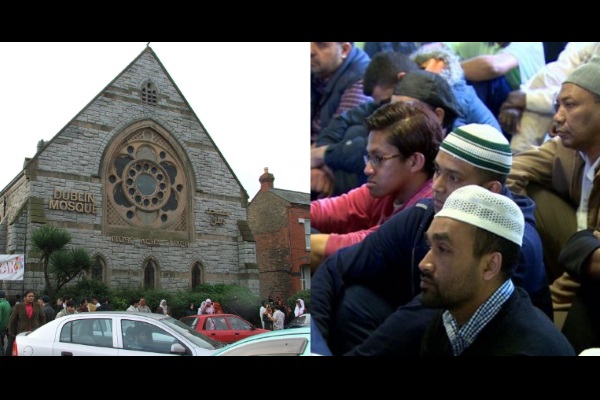 It is estimated that about 5000 Muslims live in Northern Ireland, but to many Islam remains a mystery.

Are Islamic ideals compatible with life in Northern Ireland and what role do Muslims play in the community? In the first part of a series, the BBC looks at issues regarding worship and asks whether Muslims in Northern Ireland face their own sectarian divisions.

An unremarkable house in south Belfast has become the hub for one of Northern Ireland’s fastest growing communities.

They are from dozens of countries – from Nigeria to Pakistan – and vary in ethnicity.

Those present said there are about 400 worshippers in this modest building, and that is a conservative estimate.

These people are gathered at the Northern Ireland Muslim Family Association (NIMFA), a group that was formed in 2002.

Javaid is one of the founders.

The office where he volunteers undergoes a transformation every Friday ahead of prayers.

“We have to put the chairs on the table and sheets on the floor so people can pray here as well.”

Sectarianism is nothing new in Northern Ireland society, but it is not unique to Christianity.

There are about 1.5 billion Muslims and the vast majority are Sunni, who regard themselves as the orthodox branch of Islam.

Countries like Egypt and Saudi Arabia have some of the largest populations.

Shia share many fundamental beliefs and practices but differ in parts of theology.

In Northern Ireland, people from all denominations of Islam worship side by side.

The congregation said there has never been any evidence of Islamic sectarian tensions in Northern Ireland.

Judging by the congestion at Friday prayer, it seems too impractical for this community to be divided.

However, separation is noticeable in one aspect – men and women.

Nearly all of the worshippers are male. A handful of women pray in a separate room.

Does this support the common view that Islam is a male-dominated culture?

Not according to Brenda. She converted from Catholicism to Islam in her early 20s and plays an active role in NIMFA.

She said it makes sense for men and women to pray separately.

“We pray in rows quite close to one another…we bow down in prostration with our head on the ground.”

She added that she believed it would be difficult and uncomfortable for women to do this in close proximity to men.

So, how did her family react to her conversion?

“I haven’t been excommunicated, I haven’t been disowned. We remain a close-knit family but with different values and beliefs but even in a Muslim family…that clash and conflict can happen.”

Dr Wesam Elbaz was a professor of medicine in Cairo before moving to Northern Ireland for family reasons.

She is now a consultant in microbiology at Belfast’s City Hospital.

What does she think when people say Islam is oppressive to women?

“You are trying to stereotype Muslim women… a lovely woman behind a veil, voiceless, powerless, dependent on other people.

“All that she knows in life is marriage and having children. This is not reality.”

You can see more of Rick Faragher’s report on BBC Newsline at 18:30 on Tuesday, 17 May.