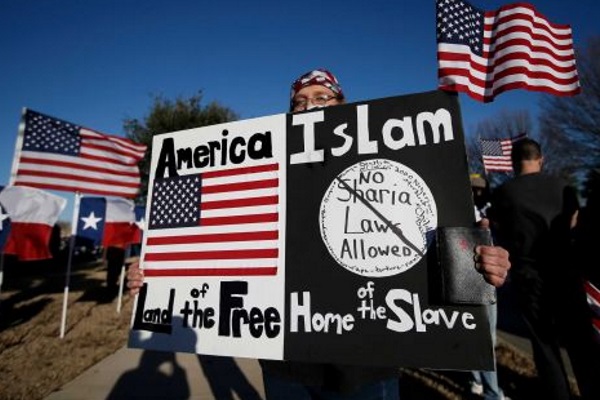 Why do I support the Sharia?  Many of you are curious about why I support Sharia.  Some of you might be curious to see why an American with an very Western sounding name supports the Sharia.  You probably wondered if I want to make America under some sort of Fox News version of Sharia Law, where every woman’s face is covered and there is no more freedom or liberty in America.

Now before I answer the question of why do I support Sharia, it is important to understand that I am a Sunni Muslim that practices the Malaki Madhab (School of Thought).  There are four Madhabs, and all four have their own interpretations of Sharia.  I do not have the religious knowledge to speak on all of them.

Also I am trying to simplify what Sharia is and is not.

So now you ask, is this compatible with American society and culture?  Are you for or against the US Constitution and the Bill of Rights?  How can you be an American and believe in Sharia?

The Grand Shaykh Abdullah Bin Bayyah, who sits on the Islamic Fiqh Council and is the former Vice-President of International Union of Muslim Scholars, as well as sitting in numerous boards worldwide has stated that Americans Must obey the American Constitution.  Islam makes it clear that you must obey the laws of the land that you live in.

Sharia also says that you must defend your country, so if we were ever to be invaded then it is my duty to fight to defend the USA.

My destination, heaven.  Of course, the GPS will recalculate when you miss a turn.  This is like getting back on the right path.

It requires me to be honest, to be just, to speak out against tyranny and injustice even if it is being performed by a Muslim against a non-Muslim.

Some have heard that Islam cuts peoples’ hands off for stealing.  Yes, in some Muslim countries, such as Saudi Arabia, if you steal a large value item, you can get your hand cut off.  However, the Sharia allows for the offender or his family to return the item or to give the monetary value back without getting your hand cut off.  It is more of a deterrent.  It is very rare to see this happen in Saudi.

However, in areas with lower education rates, this is a little bit more common.

Do I want to make all American women cover?  No, it is their choice to dress how they choose.  The Qur’an states that there is no compulsion in religion, we cannot force anyone to do anything.  I do want the right to have my daughter cover, and this is my choice as a parent.  Just like American parents have the right to allow their daughters to wear very revealing clothes at young ages meant to attract the attention of the opposite sex.  I choose to now want to have my daughter when she is older to have strange men look at her and respect her for her body.  It can never be respect.  I want my daughter to be appreciated for her intellect.

There is a judicial aspect of Sharia in Muslim countries.  However, it is my belief that this is for the countries that have it and not for the USA.  We are a pluralistic society based upon a Constitutional Republic that guarantees our right to the Freedom of Religion even though some States like Oklahoma passes anti-Sharia laws which would in effect make me a criminal for praying violating my Civil Rights?

Would it be fair to prevent me from praying and throwing me in prison for doing so?

The scholars have stated that any law that benefits humanity is Sharia.  So traffic laws, or laws pertaining to business, contract laws, laws that protect people are all Sharia.  Some schools of thought believe that only Allah or the one G~d can create laws.  That any laws that are man-made are against Islam and that people who follow them should be punished.

This is a very minority opinion of the Khawarij and Takfiris (unorthodox, extreme Muslim groups) yet their opinions get the news.