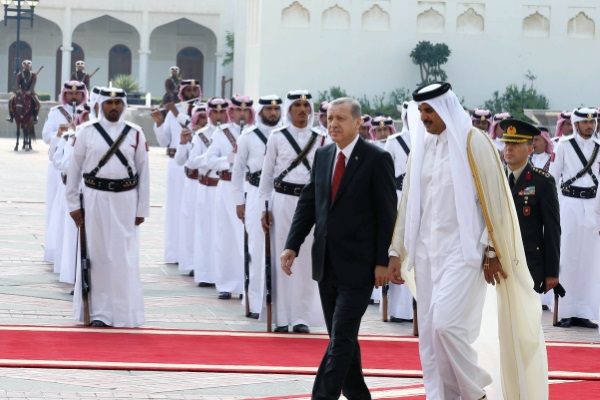 The threats include increasing isolation for both nations at a time of widespread instability in the region, according to Gulf State Analytics founder Giorgio Cafiero.  The base, he said, is also symbolic, demonstrating Turkey’s move toward greater influence in the region and Qatar’s independence from its powerful neighbors.

The return of Turkish troops to Qatar a century after Ottoman forces left the peninsula is largely about prestige,” Cafiero said during a recent trip to Qatar.

Besides isolation, added Cafiero, Qatar and Turkey are united in their distrust of Iran, with both countries supporting Iran’s enemies in Syria and Yemen.  And since the Iran nuclear deal, the United States is no longer seen as a reliable military counter to Iran’s considerable strength.

“They think if the U.S. doesn’t see Iran as a threat, the U.S. will withdraw,” he said.

Qatar is home to the largest U.S. military base in the Middle East, with roughly 10,000 personnel.  The new Turkish base is expected to house more than 3,000 people, including ground troops, special operations teams and military trainers.

In Egypt, where Qatar and Turkey have supported the now-outlawed Muslim Brotherhood, locals say the military alliance appears to be a power play in the region.

The Egyptian government regularly becomes angry over Qatar’s support of the Muslim Brotherhood and has banned that nation’s television network, Al-Jazeera.  On Saturday, an Egyptian court recommended the death penalty for six people, including two Al-Jazeera journalists, charged with leaking state secrets to Qatar.

Qatar may increase its strength through this alliance, according to Mohamed Salah, a 34-year-old international trade researcher, as he walked home from work Wednesday; but, Egypt will remain more powerful, he said.

“It’s not a direct threat,” he said. “I believe that Egypt still has the upper hand in the Gulf region by its relationship with the Kingdom of Saudi Arabia.”

When the Arab Spring uprisings began, Turkey and Qatar supported Muslim Brotherhood factions across the region, angering many Arab governments as the two nations worked to increase their influence.  Qatar, a rich but tiny nation of roughly 2 million people, lost some of its credibility among Gulf Cooperation Council members, including regional powerhouse Saudi Arabia.

“Qatar’s lowest point in GCC relations came when Saudi Arabia, the UAE, and Bahrain withdrew their ambassadors and threatened to close Qatar’s border for the alleged interference in GCC internal affairs,” writes Chris Solomon of Global Risks Insight, referring to a 2014 diplomatic dispute.

More recently, however, Qatar and Saudi Arabia have stood together in withdrawing ambassadors from Iran after the Saudi embassy in Tehran was attacked in retaliation for the execution of a Shi’ite cleric in the Kingdom.

Turkey has also found itself becoming more isolated internationally in recent years for other reasons.  Turkey angered Russia by shooting down a Russian plane late last year, and its handling of Islamic State upset the United States.   Turkey also is wrangling with Europe over free expression issues and is without active diplomatic relations in several Middle East countries.

Besides avoiding hardships that come with relative international isolation, Turkey and Qatar have other reasons for strengthening their military alliance, according to analysts.

Turkey, with nearly 75 million people and one of the region’s strongest military forces, stands to gain not only influence, but money as it breaks into the Gulf’s “lucrative defense market,” said analyst Cafiero.

“At this juncture,” he said, “Officials in Ankara view Qatar as Turkey’s most trusted Arab ally.”

“A shared political vision regarding the Middle East has helped bring the Turks and Qataris even closer,” Olivier Decottignies and Soner Cagaptay of The Washington Institute wrote in a January policy analysis piece.

Additionally, the move is part of a larger, long-term strategy, adds Cafiero.  Qatari alliances are often with competing powers in order to play them off each other politically.  The base, therefore, “further diversifies Doha’s web of defense partners and provides more states with higher stakes in a stable and prosperous Qatar.”

Cairo’s relationship with Doha and Ankara

And while people in Egypt do not necessarily see the move as aggressive, there is some worry that this strengthening alliance will further worsen relations.

“The union of those two countries together and the fact that their relationship with Egypt is not good,” said Haj Mohy, a 52-year-old shopkeeper as he takes delivery calls while listening to Koran in a Cairo suburb.  “Maybe there will be danger.”

Then again, he added, with all of the volatility in the region, it is hard to say what one new base could bring.