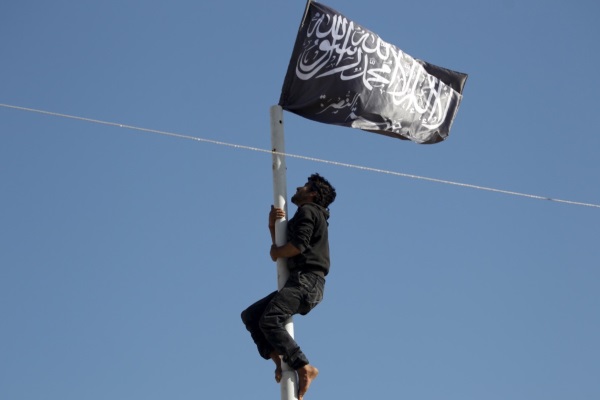 A member of al Qaeda's Nusra Front climbs a pole where a Nusra flag was raised at a central square in the northwestern city of Ariha, after a coalition of insurgent groups seized the area in Idlib province May 29, 2015. A Syrian insurgent alliance which has captured the last government-held town in the northwestern Idlib province made further advances on Friday, a monitoring group and fighters said. REUTERS/Khalil Ashawi - RTR4Y10S

In audio recording al-Qaeda leader says group’s Syrian branch free to go on its own as long as outcome is Islamic state.

Al-Qaeda leader Ayman al-Zawahiri has released an audio recording, hinting that his organisation has no objection to the breakaway of its Syrian affiliate, al-Nusra Front.

In the audio statement posted online, Zawahiri said many people talked and fought about the issue of al-Nusra and its al-Qaeda link.

He said if the people choose their own leadership, the organisational affiliation will not be an obstacle to what he described as “the great hopes of the Islamic nation”.

Al-Nusra, one of Syria’s main armed groups, has been excluded from peace talks between the country’s government and opposition in Geneva because of its affiliation with al-Qaeda and it remains on UN and US terror lists.

In recent months there have been several reports suggesting al-Nusra is trying to “rebrand” and present itself to the Syrian people, as well as outside powers such as the US, as a more moderate, purely Syrian force not linked to al-Qaeda.

But, the group’s leadership was reportedly unsure about breaking the organisational bond with al-Qaeda.

“There was disagreement within the Nusra leadership about what to do,” Khodr said. “Maybe things will change now that Zawahiri has actually given his blessing”.

The group – known as Jabhat al-Nusra in Arabic – has been actively involved in Syria’s war since 2012, battling Syrian government forces across the country. It has also fought smaller rebel groups, including Western-backed ones, for control of territory.

Al-Nusra is a popular force on the ground among many Syrians opposed to the government, because of its fighting capabilities. But, at the same time, many Syrians in the opposition have long been worried about the group’s links to al-Qaeda.

Recently, the Free Syrian Army, engaging in the political process with the West, has been weakened as al-Nusra has made gains.

On Friday, al-Nusra and its allies captured the strategic town of Khan Touman in Aleppo province, from pro-government forces, a victory that could potentially open up new supply routes for rebel-held areas of the city.

Zawahiri’s message came at an “interesting time”, Khodr said. “Those who back the opposition see al-Nusra as the only force capable of confronting the government at the moment.

“The question now is what will the stance of the international community be, if al-Nusra decides to disassociate itself from al-Qaeda? Will they consider al-Nusra as a legitimate Syrian opposition force?”

Since al-Nusra is considered a terrorist organisation by the UN and the US, it has not been an official party to any negotiations about the future of Syria.

But it has allied itself with several other Syrian groups, who are not on international terrorist lists, in order to gain legitimacy.

“Certainly many in the Syrian opposition will say if al-Nusra disengages itself from al-Qaeda, it will no longer give the Russian government and the Syrian government a pretext to attack moderate rebels,” Khodr said.

Al-Nusra was excluded from a ceasefire agreed between government forces and the opposition in February.

The opposition has complained that Russia as well as the Syrian army are using the presence of al-Nusra fighters as a pretext to attack rebel-held areas, including in Aleppo, where recent fighting has left hundreds of people dead.