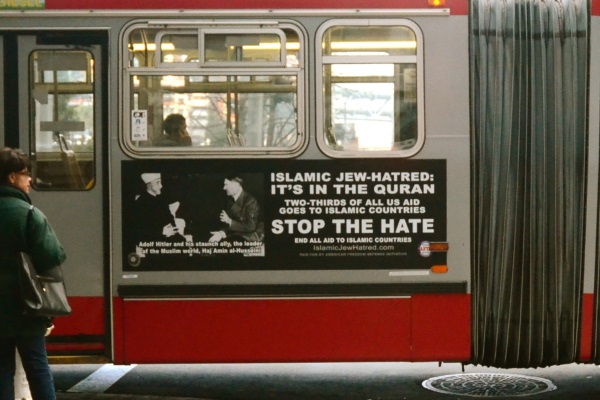 Congress passed the Hate Crime Statistics Act in 1990, and since then the FBI has been issuing annual reports on crimes of bias or hate crimes.

I thought it might be useful to compare the year 2000, Bill Clinton’s last in office, with2013 and with 2014, the last two for which statistics are available, to see how the nation has changed.  Unsurprisingly, there has been an eight-fold increase in anti-Muslim hate crimes during these 14 years.

There are lots of caveats here.  The FBI depends on local police departments to report hate crimes, who in turn depend on victims to report them in the bulk of cases.  The whole country is not even covered.

Muslim-Americans are disproportionately first- and second-generation immigrants and while they are typically middle or upper middle class, they often came from countries where the police are not your friends, and they may be hesitant to report hate crimes against them.

It would be interesting to know if any anti-Muslim hate crimes take the form primarily of racial hatred against Arabs, South Asians, African-American Muslims or white Muslims (viewed as quislings by racists?).  But Arabs are not a category and I presume are being counted as white (22% of hate crimes are directed against this group), and South Asians in the US are counted as Asians (6.2% of hate crimes are directed at them and they are 5% of the population nationally).

What we can see is a welcome decline in the proportion of hate crimes directed against Jews, though of course it is way too high given that they are less than two percent of the American population.

In 2000, both anti-Catholic and anti-Protestant hate crimes ran at about 3.8 percent of religious crimes of bias, respectively.

In 2013, the percentage of hate crimes directed at Catholics was up to 6%, that is, they increased by about a third, and this was true in 2014, as well.

(It is possible that the anti-Catholic animus is a proxy for anti-Latino feeling.  But it is worth mentioning that hate crimes against Latinos are put in the category of “ethnic” rather than “racial” hate crimes, and that the Latino share of victimization by such crimes fell from 61% to 47% between 2000 and 2014.)

The percentage accounted for by anti-Protestant feeling remained the same in 2013, at about 3.8 percent, but in 2014 it actually fell, to 2.5 percent.

Note that according to most social science surveys, there are about half as many American Muslims as American Jews.  Muslims constitute roughly 1% of the US population but about 3% of all hate crimes target them.

We can see in these statistics some of the reason for which the most pond-scum-ish of the GOP candidates are running on anti-Muslim hatred.  Their polling is telling them about this big increase in Islamophobia that is visible in the hate crime statistics.  And rather than running away from the sort of bigots who commit these hate crimes, they are eagerly courting their votes.

The fear that all right-thinking Americans now have is that the flame-throwing rhetoric of the GOP demagogues will put up the number of hate crimes nationally in 2016 and after, and that the proportion that target Muslims and Latinos will expand yet again.  We should never forget that hate is not just an emotion displayed by an ugly set of the mouth at a rally; it turns into broken noses and broken ribs and burned-down buildings.  Those are the genies the hate-mongers are summoning for us.

Juan Cole is a professor of history at the University of Michigan and maintains the blog Informed Comment.
The statements, views and opinions expressed in this column are solely those of the author and do not necessarily represent those of RT or MuslimVillage.
Tags: Anti-Islam Attacks anti-Muslim hate anti-Muslim hate crime anti-Muslim sentiment Attacks on Muslim Women Australian Muslims community Donald Trump Donald Trump's comments Donald Trump's presidential campaign Khairuldeen Makhzoomi Southwest Airlines