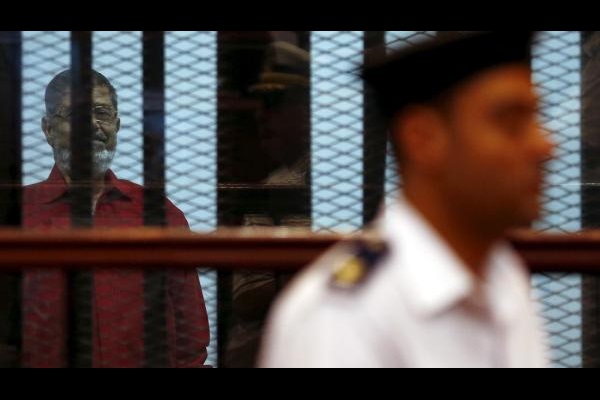 CAIRO – An Egyptian court has handed down death sentences to six defendants in a trial for Egypt’s ousted president Mohamed Morsi and others charged with transferring secret information to the Gulf state of Qatar. Morsi’s verdict was postponed.

The court sentenced six of the 11 defendants to death Saturday, pending a review of the verdicts by the country’s top religious authority. The panel of three judges postponed a decision about Morsi until June 18. The trial is one of several the ousted former president is facing.

Video from the courtroom showed Morsi in the glass defendant’s cage, smiling and waving his hands in what appeared to be a victory gesture. Several co-defendants could also be seen smiling and chanting, but it was impossible to distinguish their words.

Morsi of the Muslim Brotherhood was Egypt’s first freely elected civilian president, but in office for only a year before being deposed.

Morsi took power in mid-2012 following the downfall of Hosni Mubarak, who had ruled Egypt for almost 30 years. Street protests against Morsi and his policies peaked in mid-2013, and he was replaced by general-turned-president Abdel Fattah el-Sissi.

All of the verdicts may be appealed, and would be reviewed before being considered final. Three of the six defendants who were condemned to death are currently outside Egypt, and were tried in absentia.

Sentences against those who are abroad and not present in court usually are set aside, pending a new trial, once they return to Egypt.

One of the absent defendants, the former head of al-Jazeera TV’s news division, Ibrahim Helal, told Arab media he thought the charges were unfounded, and said he is not worried about his situation.

Helal, a former news editor with Egypt’s state-run television, says the verdict against him is a badge of honor, and that he doubts any legal body in another country would honor the ruling or hand him over to Egyptian authorities.

On the specific charges raised in court, Helal said the allegation that he handed over 17 pages of sensitive defense information to Qatar was “not extremely convincing,” since only one page of the document in question was even “remotely sensitive,” dealing with Egypt’s “improving ties with the Hamas group in Gaza.”

Egyptian editor and publisher Hisham Qassem said he was surprised by the verdict. “Most of those sentenced to death were fairly insignificant figures,” he said, “while the top defendants (such as Morsi) appear to have been spared harsh sentences,” at least for the moment.

The head of the Muslim Brotherhood’s foreign relations department told Qatari-owned al-Jazeera TV the trial on Saturday was “purely politically motivated,” because the Egyptian judiciary is “under the thumb” of Egypt’s President Sissi.

Another defendant in the case who was not present in court, described as a Qatari intelligence agent, was not named.