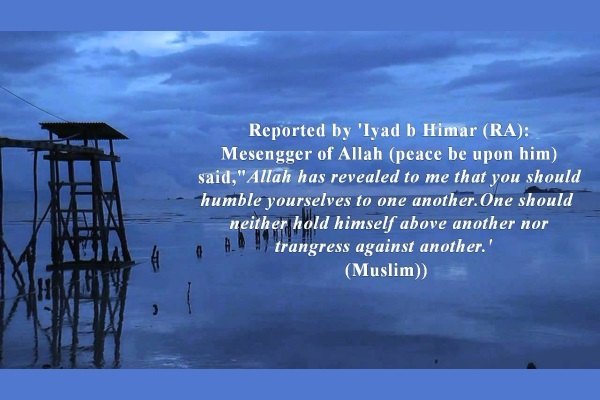 “The servants of the All-Merciful are those who walk on the earth in modesty, and if the ill-mannered offend them, they say: “Peace.” (25:63)

Nabi Sallallahu ‘alayhi wasallam said: “He who humbles himself for the Pleasure of Allah, Allah will elevate his status (so that) he regards himself as ‘insignificant’ yet in the eyes of people he is held in high esteem. He who behaves arrogantly, Allah will humiliate him (so that) he regards himself as ‘great’ whilst he is more despised in the eyes of people than a pig or dog.” (Bayhaqî) Those who are truly humble do not attribute the fruits of their work and efforts to themselves, nor do they regard their efforts and successes as a mark of superiority. They do not care how other people regard them, and do not demand acknowledgment of their services or presence.

Many people confuse humility with self-loathing. They look down upon themselves for some reason or think they are not worthy of being where they are in life or that they don’t deserve the chances that others get. Humility is not the same as low self-esteem, and it is not the opposite of confidence. Nor is humility wallowing in self-pity.

• Humility is a sign of strength, a virtue and it is extremely empowering. It is a reflection of spiritual, mental and emotional maturity while haughtiness and self-conceit indicate an imperfect, immature and lowly self. Nabi Sallallahu ‘alayhi wasallam has said: “The most perfect of believers in terms of their faith are those who have the best of characters.” (Abu Dawud)

• Humility empowers you to avoid argument with the ill mannered: “and if the ill-mannered offend them, they (continue their way) saying: “Peace” Indeed, the sin of Iblis (Satan) was his arrogant refusal to humble himself to the will of Allah. He believed that he was superior – better than any other creation – and therefore disputed with Allah when he was told to prostrate before Adam Alayhis Salaam. Get past the impulse to judge others, and you’re able to focus much more clearly on matters of real and lasting value.

• Humility elevates you: You may regard yourself as unimportant but Allah will elevate your esteem in the eyes of people.

• Humility is a sign of power and not weakness: “Free yourself from the demands of your ego, and there is no limit to where you can go.”
• Humility creates enlightenment: “Let go of your desire to control others, and you vastly improve the ability to control, focus and direct your own actions. Let go of the illusion that you already know it all, and you open yourself to higher levels of enlightenment.”

• Humility opens up a new world: “Give up the thought that you’re better than everyone else, and a whole new world of opportunity opens up to you. Stop seeking unfair advantage and you’re free to develop an unstoppable effectiveness.”

Nabi Sallallahu ‘alayhi wasallam has referred to three things that result in the opposite of normal human experience. He says: “Wealth does not decrease because of charity, and Allah increases His slave in honour when he forgives others. And no one humbles himself before Allah but Allah will raise him (in status).” (Muslim)

Ibn al-Qayyim states: “Humility comes from knowing about Allah and His names and attributes, His greatness, venerating Him, loving Him and being in awe of Him. (It also comes from) knowing about oneself and one’s faults, and weaknesses. From that may develop the attitude of humility, which means feeling helpless before Allah, and being humble and compassionate towards His slaves, so that the person does not feel superior towards anyone, or think that he has any rights over anyone else; rather he thinks that others are better than him, and that their rights come before his. This is a characteristic that Allah gives to those whom He loves, honours and draws close to Him.”
May Allah make us among those that walk this earth humbly and may He protect us from arrogance and pride.