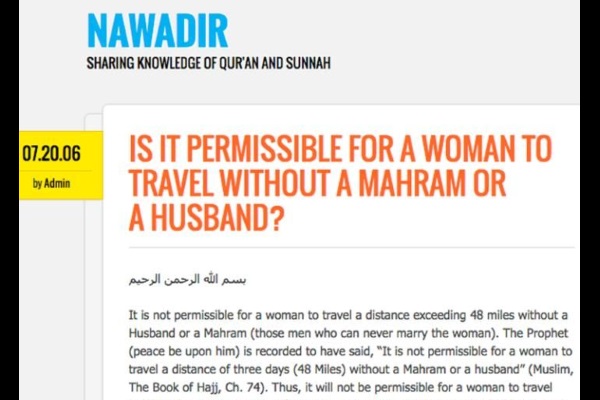 MV Editor’s Note: As many of our readers will know, the point that is being condemned reviled and otherwise blown completely out of proportion by some British politicians is a completely uncontroversial and mainstream Sunni ruling connected to religious belief and practice. The Blackburn Muslim Association is by no means distinct or unique in advocating mahrem restrictions for women who travel as it is a standard aspect of Islamic law with other rules about the length of prayers and so on connected to it. Fatwas and exceptions aside, no Muslim scholarly service is at liberty to present the ruling differently as to do so would be to misrepresent the existing legal literature. For Muslims in Britain it is a matter of religious conscience and morality whether or not to adhere to religious travel restrictions and the requirement that a mahrem (male kin) accompany women. We have republished this report to help bring awareness to the astounding level of ignorance of Islam and its teachings on the part of some politicians who are supposed to have large Muslim constituencies and journalists who seem to lack as much in scruples as in familiarity with the subject matter. Now that a Muslim is running for London mayor, that ignorance and unscrupulousness is contributing to the shameful politicization of basic Muslim religious practice.

Women should not be allowed to go on long journeys without a male chaperone a British Muslim group has advised followers.

Justine Greening, the International Development Secretary and equalities minister condemned the advice from Blackburn Muslim Association as “disgraceful” and said such views had “no place” in modern Britain.

Instructions from the association’s “Department of Theology” insist that it is “not permissible” for a woman to go more than 48 miles – deemed to be the equivalent of three days walk – without her husband or a close male relative.

It also stipulates that men must grow beards and advises women to cover their faces.

The rulings are contained in a question and answer section of the group’s site which offers offer “solutions and answers” to social, religious and financial matters from Sharia teaching, accompanied by the catchphrase: “Allah knows best.”

The group is listed as an affiliate of the Muslim Council of Britain (MCB) and claims on its website to have received funding from its local council in the past.

But leading Muslim scholars, including a prominent adviser to the MCB, rejected the guidance as “offensive in this day and age” while the National Secular Society condemned it as “almost medieval”.

The row comes amid increasingly acrimonious debate about religious identity and race in the run-up to today’s local and mayoral elections.

Ms Greening’s intervention came following a question from David Davies, the Tory MP for Monmouth, during development questions in the Commons.

He asked if efforts to improve sexual equality “would be made easier if organisations like the Blackburn Muslim Association were not putting out information to people that women should not be allowed to travel more than 48 miles without a chaperone?”

She replied that she had seen the website, adding: “Frankly the view that they expressed on it is disgraceful and unacceptable.

“It has no place in Britain and is contrary to our British values and I think the Blackburn Muslim Association should very clearly and publicly withdraw those comments.”

Neither the Blackburn Muslim Association not the Muslim Council of Britain commented officially last night.

But Dr Sheik Howjat Ramzy, an Oxford-based scholar and former head of the MCB’s education committee said: “I believe this is offensive in this day and age that such a restriction should be placed on any woman against her wishes.

“This practice was a very old tradition which had been followed by some when there was no security for women and when women were at risk of being abducted when travelling alone. – this was a tradition at the very beginning of Islam.

“I would think no Muslim man has the right to impose these restrictions of movement. Women should be free to go where they please.

“I believe they should withdraw this statement and not degrade women. Islam gives great freedom to women – travel is part of that freedom.”

Keith Porteous Wood, executive director of the National Secular Society, said: “Women are entitled to their own autonomy and freedom of movement; any attempt to limit this must be condemned roundly by all sectors of society.

“We hope that this almost medieval attitude to women is an isolated case, but if the problem unfortunately gains ground, it may become necessary to consider what sanctions are appropriate against those restricting others’ freedoms.”

Lord Green, the founder of the think-tank Migration Watch UK, said: “There is no place in our society for restrictions of this kind on the freedom of women.

“Muslim leaders would do well to encourage their followers to integrate with our society rather than cut themselves off.”

Blackburn has the third highest percentage of Muslims, after Tower Hamlets and Newham in east London.