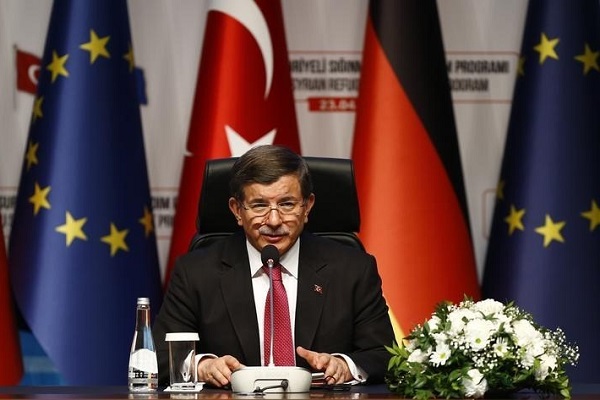 ANKARA (Reuters) – Turkey’s new constitution will retain secularism as a principle, Prime Minister Ahmet Davutoglu said on Wednesday, playing down comments from the parliamentary speaker who triggered a public uproar by calling for a religious national charter.

Speaker Ismail Kahraman said this week that overwhelmingly Muslim Turkey needed a religious constitution, a proposal at odds with the modern republic’s founding principles. He later said his comments were “personal views” and that the new constitution should guarantee religious freedoms.

“In the new constitution which we are preparing, the principle of secularism will be included as one guaranteeing individuals’ freedom of religion and faith, and the state’s equal distance to all faith groups,” Davutoglu said in a speech to members of his ruling AK Party.

Kahraman’s comments provoked opposition condemnation and a brief street protest, highlighting the schism in Turkish society reaching back to the 1920s when Mustafa Kemal Ataturk forged a secular republic and banished Islam from public life.

Davutoglu also said the government would seek a a “liberal interpretation” of secularism, as opposed to an “authoritarian” one.

President Tayyip Erdogan and the ruling AK Party he founded, their roots in political Islam, have tried to restore the role of religion in public life. They have expanded religious education and allowed the head scarf, once banned from state offices, to be worn in colleges and parliament.

The headscarf ban, widely seen by the millions of pious Turks who back the AKP as an authoritarian stricture, was overturned by the ruling party in 2013.

The AKP is pushing to replace the existing constitution, which dates back to the period after a 1980 military coup. As speaker, Kahraman is overseeing efforts to draft a new text.