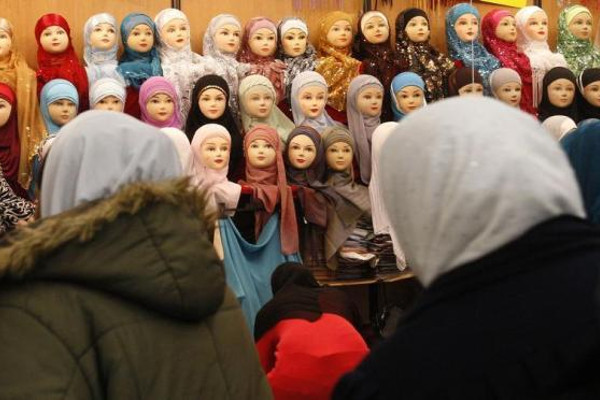 When you deny a religious covering, you are also denying religious liberty.

Student activists in France made a bold statement Wednesday by wearingheadscarves and declaring it Hijab Day at one of France’s top universities, the Paris Institute of Political Studies. The social project was meant to show solidarity with Muslim women who choose to wear the religious covering, and to help students better understand the experiences those women face on a daily basis.

The hijab, a religious symbol for Muslim women, is often met with stigmatization and negative connotation in the secular country. Muslim women in foreign countries have repeatedly been made to feel like outsiders when people assume, based on their clothing, that they are oppressed or violent.

The activists were responding to a suggestion from Prime Minister Manuel Valls, who said last week that headscarves should be banned from universities. This isn’t the first time France has called for a ban on religious coverings — former President Nicholas Sarkozy banned the full-face Muslim veil from all public places in 2011.

Freedom of religion is protected under the French law known as laïcité. The law separates church and state and asserts that religion remain out of the public sphere. Over the last decade, the law has been pushing its limits by passing policies that target Muslims and keep them from expressing their religion through prayer or by wearing burqas.

Despite having the largest Muslim population in Europe, France has failed to treat all religions equally and fairly address the rights of a major religious group.

France’s prohibitive measures towards hijabs demonstrate a lack of respect for Muslim culture, religious freedom and free will. Wearing a hijab in a Western country is already a misconstrued gesture that leads to exclusion and harsh treatment — banning them at universities would completely deny access to a group of people simply for expressing their beliefs.

Students wearing a headcover for one day cannot truly understand the day-to-day pressures to conform that Muslim women face. But their efforts to stand with Muslim women in their right to choose what they wear sends a strong message of solidarity and cultural acceptance.

At a time when many Muslims are facing blame for terrorist attacks they did not commit, these activists’ efforts speak volumes about the importance of unification. The persistent efforts by the French government to get rid of all public acknowledgement of religion has become an infringement on basic individual rights. Allowing women to wear hijabs does not mean any institution is endorsing the religion — it marginalizes Muslim communities even further in a blinded attempt to appear neutral. These types of statements only divide people at a time when they desperately need to be unified.

Due to the recent terror attacks in Paris and Brussels, anti-Muslim sentiment in western Europe is increasing. According to Tell MAMA, an NGO that tracks hate crimes against Muslims, the rate of hate crimes increased threefold in the UK after the Paris attacks in 2015. If it wants to defeat radical jihadists, France needs to collaborate with its Muslim allies in a united front. Anti-Muslim sentiment only reinforces the “us” versus “them” mentality, when in reality, both the secular government and the majority of non-violent Muslims are fighting the same fight against acts of terrorism.

By indirectly excluding Muslims from public institutions and spurring a useless controversial debate, France is not helping to bridge its people together, it’s further separating them.

The students on Wednesday were challenging these types of dangerous policies by wearing hijabs and refusing to allow fear to alienate people based on their religions.

Instead of pushing Muslims away, it would best serve France’s interest to treat its Muslim citizens equally and not blame their religion for disrupting the country’s secular values.

A woman’s clothing choice should not be politicized, especially when there is so much more at stake.