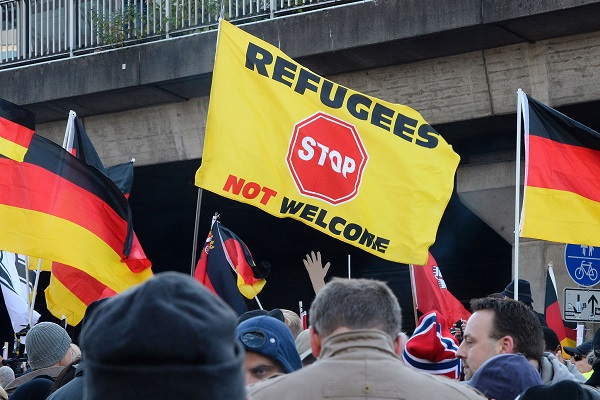 Ignorant bigotry these days has become Europe’s daily bread. The very continent which lived in its flesh the infamy and shame of fascism just a few decades ago, stands today to repeat the same violence, and play by the same hate.

Friedrich Nietzsche once said: “Whoever fights monsters should see to it that in the process he does not become a monster. And if you gaze long enough into an abyss, the abyss will gaze back into you.”

This one quote encapsulates our current predicament. Europe most definitely lost itself in the chasm of radicalism. Or maybe it is Islamic radicalism which mapped itself on the intolerance it found in Europe’s best export: unapologetic imperialism.

Regardless of blame, and beyond any admission of guilt, lies a rather bleak reality: Europe no longer plays by the freedom it once cried out for so loudly that kingdoms came tumbling down. Heads rolled in Revolutionary France so that the Republic would rise a new mistress over men; ink flowed so that civil liberties could become enshrined not in stone but constitutions.

From French Prime Minister Manuel Valls’ cries that Muslims should be saved from their own faith, to Britain’s former Prime Minister Tony Blair’s claims that “Muslims are fundamentally incompatible with the modern world”, Europe is a lamb awaiting slaughter, a fascist ticking time-bomb in democratic free fall.

Intellectuals have been vilified and mocked so that European capitals could play “J’accuse” in a twisted re-enactment of a brutal anti-Semitic past. Governments have pushed for increasingly harsh policies against minorities so that their own hands in generating worldwide unrest would remain shielded from view. If not for military interventionism, Europe would not have witnessed such an exodus towards its shores.

How many more Salah Lamrani will Europe persecute so that its new-found nationalist existentialism could be appeased, so that all people could be made to conform to the new established norms?

Which terror was first born, and which of the two made way for the other: that expressed in Western imperialism or that of the Black Flag Army? While you debate the chicken and the egg I will offer this: the two are co-dependent, and neither can be defeated by the other.

I will venture to say that a return to the rule of law makes for a good strategy. I will also remind readers that it was Russia which found a way out of this no-way street. As Europe’s democracies waver, and Islamophobia has risen, Moscow has anchored its policies in equality before the law – there lies the cornerstone of real democracy. There lies a lesson Europe would do well to heed if it is not to sink back into old habits.

Such political and moral erosion has been felt most of all in Eastern Europe, in those very states the West saved from the clasp of devilish Russia… How is that for political irony? Only no one is really laughing! Not when people’s inalienable rights stand in the balance – not when nations stand to be engulfed in yet another “cleansing”.

A press release from Freedom House reads: “The biggest challenge to democracy in Europe is the spread of deeply illiberal politics.”

And leaders in post-Soviet countries have “exploited the [refugee] crisis to strengthen their populist appeal, disregarding fundamental humanitarian principles and the ideals of democratic pluralism for short-term partisan gain.”

In their desire to deflect blame and avoid admitting that it was their policies an irresponsible taste for military interventionism which manifested a very modern exodus towards Europe, officials have made the ultimate transgression: rejecting the rule of law in favor of ethnic nepotism… not only that, but they institutionalized ethno-sectarianism by criminalizing a faith on the assumption it is foreign.

The insanity of it all appears to have escaped Europe’s ruling elite. Only this week one very British Trevor Phillips, the former head of the Equality and Human Rights Commission and arch-advocate of multiculturalism, argued that ethnic quota could help by way of clamping down on Islamic radicalism. “British Muslims are becoming a nation within a nation,” he said.
I don’t recall belief being an ethnic marker, but then again, no one ever said that fascism was rational.

Although there is little escaping the threat posed by radicalism, we might have underestimated its ability to manifest under different denominations: i.e: illiberal nationalism, authoritarianism.

“The European struggle to come to grips with the migrant crisis on its borders, as well as ongoing economic turmoil, are the leading causes of this democratic malaise,” said Freedom House.

The root of all radicalisms hide behind the rationalization of neo-imperialism – that desire to exert control over land, people and resources.

Everything else is just white noise.

Catherine Shakdam is a political analyst, writer and commentator for the Middle East with a special focus on radical movements and Yemen. A regular pundit on RT and other networks her work has appeared in major publications: MintPress, the Foreign Policy Journal, Mehr News and many others.Director of Programs at the Shafaqna Institute for Middle Eastern Studies, Catherine is also the co-founder of Veritas Consulting. She is the author of Arabia’s Rising – Under The Banner Of The First Imam