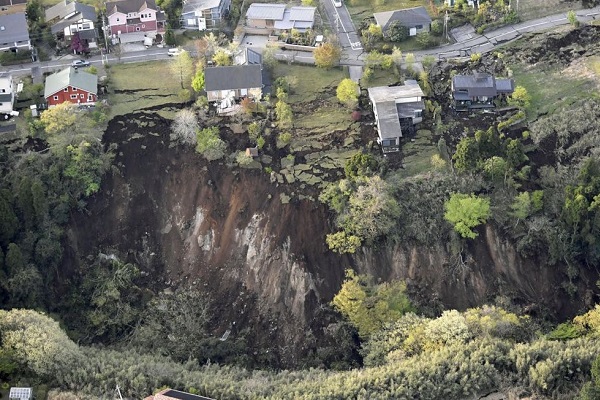 TOKYO – Tens of thousands of traumatized Japanese are spending a third night in evacuation centers as powerful aftershocks rock the southern main island of Kyushu.

At least 41 people have died and nearly 2,000 have been injured since Thursday as a result of the strongest tremors. The quakes have collapsed buildings and bridges, triggered landslides and even derailed a bullet train.

Early Sunday, rescuers were battling harsh weather conditions in a race to rescue as many as 100 people still trapped or buried under collapsed buildings in Kumamoto Prefecture.

Tens of thousands of police, medics, firemen and self-defense force troops are involved in the rescue and recovery effort, which is being hampered by heavy winds and rain.

The quakes have sent more than 90,000 people to evacuation centers at schools and local government buildings, according to officials.

The Japan Meteorological Agency placed the magnitude of Saturday’s quake at 7.3, which followed Thursday’s 6.5 tremor. Both were at shallow depths, onshore and located under populated areas.

Asked by VOA News whether he concurred with JMA’s assessment that Thursday’s shallow temblor was a foreshock to the stronger quake on Saturday, University of Tokyo professor of geophysics Robert Geller said, “Now I would. But if there is a M7.6, say, tomorrow, we’d have to revise that again. Highly unlikely; yes. Completely impossible: no.”

Geller added that the series of powerful quakes in Kumamoto prefecture is not uncommon.

An active volcano in the area, Mt. Aso, also erupted for the first time in a month, although Japanese authorities said the eruption was not linked to the quake.

Japanese Prime Minister Shinzo Abe had planned to visit Kumamoto, 1,200 kilometers southwest of the capital, to survey the damage, but has decided to avoid the area while aftershocks continue. More than 250 detectable tremors, located in or near the Beppu-Shimabara rift zone, have been reported since Thursday’s earthquake.

Abe has ordered troop reinforcements to the region to “concentrate the government’s full capacity into the rescue, evacuation and life-saving operations.”

The two quakes toppled buildings and caused a large fire at an apartment complex in Yatsushiro city. Officials said they fear more people are trapped or buried beneath the rubble of buildings.

The historic Aso Shrine, more than 1,700 years old, suffered a great deal of damage. Part of a wall in the historic Kumamoto castle also collapsed. Several buildings and a gate known as the “cherry blossom gate” have collapsed entirely.

One bright spot was the televised rescue of a baby who was carried out of the debris of a collapsed home.

More than 80,000 homes in Kumamoto Prefecture remained without electricity early Sunday and water service has been disrupted in some areas, forcing residents to haul water from local offices to their homes.

Government spokesman Yoshihide Suga said there are no apparent abnormalities at nearby nuclear facilities.  The epicenter of the first quake was about 120 kilometers northeast of the country’s only operating nuclear plant.

Most of Japan’s other nuclear reactors remain offline after a M9.0 earthquake in March 2011 triggered a huge tsunami that caused catastrophic damage to the Fukushima Daiichi nuclear plant.