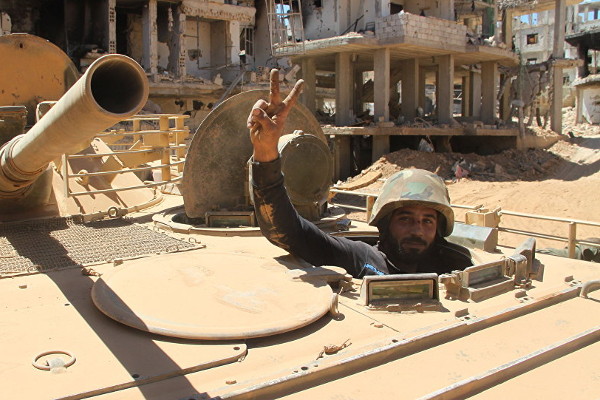 Islamic State-controlled territory in Syria has shrunk by nearly a quarter in the past few months, but Kurds, Syrian rebels and forces loyal to embattled President Bashar al-Assad have all grabbed pieces of the self-styled caliphate.

Earlier this week, French Defense Minister Jean-Yves Le Dria became the first senior official from a member of the U.S.-led coalition against IS to offer a hopeful timetable for the capture of Raqqa, as well as the group’s key Iraqi stronghold, Mosul. He said in a speech the two cities “must fall in 2016.”

During a visit to Baghdad, Le Drian said this year should be a “major turning point in our struggle against the so-called Islamic State.”

A question being discussed by independent Mideast analysts and at influential Western research firms, however, is who is going to win Raqqa and drive out the jihadists — Russian-backed forces loyal to Assad, or a more Western-tilted alliance composed of Kurdish militiamen and their Arab allies?

Acknowledging that one of the most difficult tasks ahead for the U.S.-led coalition is trying to get opposition forces geared up in the coming months for a push on Raqqa, U.S. officials are reluctant to be drawn into sketching out a timeline.

“We are considering a number of different proposals to accelerate the defeat of ISIL by better enabling local forces, but no decisions have been made,” said Navy spokesman Capt. Jeff A. Davis, using a different acronym for the terror group, which is also known as ISIS and Daesh. U.S. officials hope the Syrian Democratic Front, a Kurd-dominated coalition of Arab militias, will be able to do so in the near future.

On Wednesday, Col. Steve Warren, spokesman for the U.S.-led coalition, said phase one of the campaign against IS had concluded with the jihadists weakened and disrupted and unable to seize new territory.

As far as the fight in Syria is concerned, the second phase, he said, is centered on isolating Raqqa by capturing more nearby villages that take away the terrorist group’s “last, best” route to move people, money and supplies in Syria and Iraq.

But the pace is slow.

Last June, buoyed by Kurdish-led successes in northern Syria along the border with Turkey — including speedily wresting control of the strategic border town of Tal Abyad after just two days of fighting — U.S. officials seemed more confident of swift progress toward capturing Raqqa. The quick advances by Kurdish fighters of the People’s Protection Units (YPG) appeared to shake up Western military assumptions that pushing back IS from key Syrian strongholds would take months or even years.

Advancing to about 30 kilometers of Raqqa, the Kurds and their Arab allies stopped. IS was expecting an assault on the city, preparing defenses and digging trenches. Mosque preachers in Raqqa told residents in the city to hoard food to withstand a siege, according to local political activists. Months later, though, there has been no movement closer to Raqqa.

One problem, some analysts say, is that Kurd-dominated forces lack the numbers to capture and hold Raqqa. Another problem: anti-IS forces that enter Raqqa, a Sunni Arab city, need to be led predominantly by Sunni Arabs in order to secure the support of local tribes and to avoid the city’s recapture being seen as a Kurdish land-grab.

Faced with those difficulties, some analysts question whether the coalition will be ready in time to capture Raqqa before Assad — especially in light of the quick work Russian-backed, mainly Hezbollah, Iraqi Shi’ite militiamen and Iranian revolutionary guards made of regaining control last month of Palmyra, the historic Syrian city that was overrun by IS in May of last year.

“It would be better if Western-backed Kurds and their SDF allies took Raqqa instead of the Assad-allied Russians, who would almost certainly be accompanied by Iranian Revolutionary Guards and Hezbollah, or other Shi’ite militias,” said Jonathan Schanzer of the Foundation for the Defense of Democracies, a Washington-based think tank.

“Ideally, we should see both the Assad axis and the jihadists lose territory,” he added. “But I certainly have my doubts that this could be achieved without serious planning and coordination on the part of the United States and other Western allies. I am not hopeful that this kind of serious planning and coordination is taking place. I would be very pleased to be proven wrong.”

There are increasing signs Assad and his foreign backers, Russia and Iran, are considering pushing their fight against IS east of Palmyra and toward Raqqa.

The prize of Raqqa

According to analyst Ross Harrison of the Washington-based Middle East Institute, the war in Syria is at “an inflection point.” Writing in the National Interest, he argues, “whoever is successful in liberating territory from ISIS potentially wins the greatest competitive advantages in the broader battle for Syria. The sudden rush to liberate Palmyra from the clutches of ISIS by the Syrian government (with Russian air support) may signal that Assad understands that the power balance is likely to tilt towards whichever side is able to demonstrate the greatest progress in defeating ISIS.”

The prize of Raqqa is tempting for Assad, according to Daveed Gartenstein-Ross, a Middle east analyst and chief executive officer of Valens Global, a U.S.-based consulting firm that focuses on threats posed by violent non-state actors.