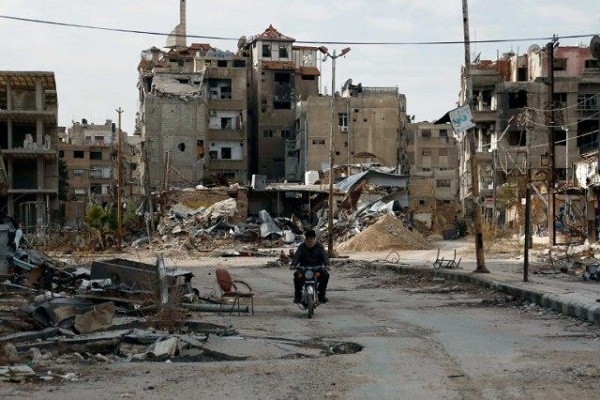 Rebel commanders and opposition politicians who have been battling to unseat Syrian Presidential Bashar al-Assad for five years say the cessation of hostilities brokered by the U.S. and Russia in February is on the verge of collapse, and they are readying for a regime offensive on Aleppo.

Anti-Assad activists say they have recorded at least 66 breaches of the truce by the Assad regime and Russian forces over the past 48 hours, with nearly 100 people, including 7 children and 5 women, killed in government airstrikes.

The cease-fire may be close to the end of its usefulness for all sides, though, and not just the government.

Bassma Kodmani, one of the rebel negotiators at the Geneva peace talks set to restart later this week, warned Sunday that the last 10 days had “witnessed a serious deterioration, to the point where the cease-fire is about to collapse”.

Both the government and anti-Assad rebels have blamed each other for breaches of the cease-fire. The regime also has been accused by U.N. officials of blocking international aid from going to some strategic rebel-held towns.

In the past 48 hours there has been a noticeable surge in fighting on all points of the compass, with all the warring parties in the country involved. IS militants retook on Monday a strategically important town in northern Syria that was lost to rebel forces just last week. The Syrian Observatory for Human Rights, a pro-rebel monitoring group, reported that after fierce clashes, al-Rai, close to the border with Turkey, was overrun.

Since the end of March, rebel factions have seized a dozen IS-held villages along the Syrian-Turkish border. According to the Syrian Observatory’s director, Rami Abdul Rahman, the lack of air cover from the U.S.-led international coalition was to blame for the rebels’ failure to hold the town. IS was not included in the cessation of hostilities, which took effect on February 27.

Rebel factions, along with al-Qaida affiliate Jabhat al-Nusra, launched offensives Monday in the provinces of Aleppo, Hama and Latakia, where they seized a hilltop. The coastal province of Latakia is the stronghold of Assad’s minority Alawite sect, an offshoot of Shi’ite Islam. In Hama the rebel focus has been on Syrian government positions in the Sahl al-Ghab plains, east of Latakia. Both sides claimed to have made advances, with regime and Russian warplanes mounting ferocious airstrikes.

In the southern Aleppo countryside regime warplanes launched more than 40 airstrikes, according to political activists, as rebel and al-Nusra fighters made advances around Zitan and Berneh in an attempt to forestall a government offensive on the city of Aleppo itself.

On Sunday, Syrian Prime Minister Wael al-Haiqi told Russian news networks the regime is preparing a major operation to retake the rebel-controlled parts of the city of Aleppo. Syria’s one-time commercial capital which has been divided into government and rebel zones since 2012. It was the prospect of a regime siege of the Aleppo rebels that added urgency in February to Western efforts to secure a cessation of hostilities.

“We, together with our Russian partners, are preparing for an operation to liberate Aleppo and to block all illegal armed groups which have not joined or have broken the cease-fire deal,” Wael al-Halaki was quoted as saying by TASS news agency. Dmitry Sablin, a Russian lawmaker, told RIA news agency “Russian aviation will help the Syrian army’s ground offensive operation.”

On Monday regime and Russian warplanes mounted several strikes on rebel districts, including al-Salhin, al-Maysar, Ba’edin, Bani Zaid and al-Shaqif. There also were several regime air-raids on Handarat, al-Mallah, and the Castillo road north of Aleppo — key supply routes for the rebels in Aleppo. Rami Abdulrahman of the Syrian Observatory for Human Rights said, “in Aleppo there is a real collapse of the truce.”

Al-Haiqi was quoted as saying that a successful regime offensive on the rebels in Aleppo would allow government forces to advance to the east toward Islamic State-held territory, and he cited the province of Deir ez-Zor, where on Sunday the U.N.’s World Food Program carried out its first ever successful high-altitude airdrop, to deliver 20 tons of food aid.

The upsurge in fighting is adding to the challenges facing the U.N., according to special envoy Staffan de Mistura, who held talks Monday in the Syrian capital.

In a meeting with Syrian Foreign Minister Walid al-Moalem, de Mistura urged the Assad government to abide by the truce and allow more humanitarian aid access.

“We did raise and discuss the importance of protecting and maintaining and supporting the cessation of hostilities, which is, as you know, fragile but is there,” de Mistura told reporters in Damascus.

A total breakdown in the cease-fire would auger badly for the resumption of peace talks on Wednesday. There has been little progress made with negotiations so far, with the major stumbling block being the future of President Assad. The rebels insist he has to go and should play no part in any transition government.

With Assad’s battlefield position strengthened, thanks to Russia’s military intervention that started in earnest last year, there are no signs of any weakening of support from the regime’s foreign allies. A top Iranian official told Iran TV this past weekend that Assad should serve out his term and be allowed to run in a presidential election “as any Syrian.”

An adviser to Iran’s Supreme Leader Ayatollah Ali Khamenei said U.S. Secretary of State John Kerry had asked “Iran to help so that Bashar Assad leaves. Ali Akbar Velayati said, “We should ask them: ‘What does this have to do with you? Shouldn’t the Syrian people decide?’”

Velayati said for Iran, the Western precondition of Assad going is “a red line for us.”