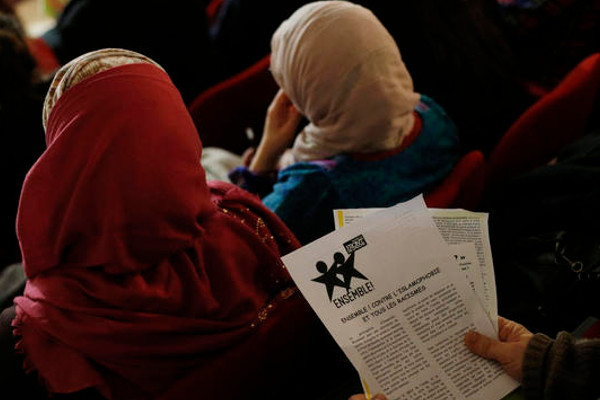 “We are tired and sick of always being targeted, of being the subject of stereotypes and racist fantasies,” Sihame Assbague told AlterNet over the phone from her home in Villetaneuse, a suburb north of Paris. “Muslim women are talked about every day, but we are not given the right to speak. Other people speak for us.”

An activist against state racism and organizer for the website Contre Attaques, aimed at countering Islamophobia, Assbague is not alone in her frustration. Muslim and Arab communities find themselves increasingly attacked by discriminatory house raids and warrantless arrests, over four months into aheavy-handed “state of emergency” imposed and then extended by the French government in the wake of the Paris attacks.

This state violence is abetted by those in France’s intellectual and political classes who are calling for the intensified criminalization and public shaming of Muslim women in the name of “saving” them. Predictably, such figures have declared open season on the veil.

Assbague put it succinctly: “Muslim women are being used to divide the communities that are being targeted.”

The latest flood of anti-Muslim vitriol was unleashed last week when France’s Socialist minister for family, children and women’s rights, Laurence Rossignol,used an anti-Black epithet to compare women who wear the veil to African-Americans who defended slavery.  “Of course there are women who choose [the veil]. There were American negroes who were in favor of slavery,” Rossignol told a reporter, using the French word “nègres,” which has colonial and racist connotations.

The statement provoked an outraged response, with over 30,000 people signing a petition declaring, “It is terrible to see that persistent anti-black racism is used to justify and legitimize a gendered Islamophobia.”

But numerous powerful figures have since rushed to Rossignol’s defense, including the billionaire French writer and feminist Elisabeth Badinter, who urged a boycott of “those labels which have decided to create lines of clothes dedicated to Islamic fashion,” according to an interview recently published in Le Monde. Badinter’s statement was a reference to a handful of high-end fashion lines which have began releasing products that include hijabs and “burkinis.”

While Badinter conceded that Rossignol had used an “unfortunate word,” she argued that the minister was fundamentally right “in terms of ideas.”

However, Badinter is chair of the supervisory board of Publicis Groupe, a French multinational advertising and communications firm that was hired to do public relations for the Saudi Arabian government. The kingdom is notoriously oppressive towards women, imposing a discriminatory system of male guardianship, under which women are prohibited from “obtaining a passport, marrying, traveling, or accessing higher education without the approval of a male guardian, usually a husband, father, brother, or son,” as summarized by Human Rights Watch. Independent reporter Chris Green recently pointed out that the firm stands accused of “helping Saudi Arabia ‘whitewash’ its human rights record.”

France’s Socialist Prime Minister Manuel Valls, who has called for France to impose a state of emergency until the “total and global war” on ISIL is over, jumped into the fray on Monday. “The veil does not represent a fashion fad, no, it’s not a color one wears, no: it is enslavement of women,” he said at a roundtable on Islamism. Anne Hidalgo, the Socialist mayor of Paris, publicly backed Badinter in statements made Tuesday.

The crescendo of resentment directed towards women who wear the veil immediately heightened concerns among many Muslims, who are already living in a politically suffocating environment where hate crimes are becoming commonplace.

“There is an increase of hate violence, racist violence and racist discrimination,” said Assbague. “A lot of women who wear the veil are prevented from going to school and working in public space. Every day we hear about a woman wearing the veil who is assaulted, arrested, and so on.”

Rania Masri, associate director of the Asfari Institute for Civil Society and Citizenship at the American University of Beirut, told AlterNet: “Elisabeth Badinter, who claims to be a feminist, is at the same time denying agency for women.” Masri added, “My respect for agency and self-expression and freedom is what causes me to object fundamentally to invasive, discriminatory laws.”

Of course, high-end fashion lines are hardly vehicles for women’s agency. Dolce & Gabbana, one of the companies in question, has been criticized for poor labor practices in its supply chains, as well as for racist clothing lines, including earrings worn by White models depicting the faces of Black women.

But in the context of France’s ever-widening civil liberties crackdown, which has been denounced by United Nations experts as “excessive and disproportionate,” the mounting attacks on the veil from society’s rich and powerful further marginalize Muslim women. This public shaming coincides with the implementation of a new European Union plan to mass expel refugees in the midst of the worst crisis of human displacement since World War II. Meanwhile, France is currently dropping bombs on Iraq and Syria as part of the U.S.-led military coalition against ISIL.

As Socialist Party leaders line up to support anti-Muslim sentiment, the far-right, anti-immigrant, anti-Muslim National Front Party is gaining ground. As the New York Times recently put it, the extremist organization now has “the political winds at its back.”

“This is a very difficult time for us here in France”

Mainstream anti-Muslim sentiment is certainly not new in France. The country has multiple laws on the books that are ostensibly premised on the French principles of secularism and universality but, in practice, disproportionately criminalize Muslim women. These include a 2004 ban on religious signs such as the hijab in public schools, as well as a prohibition on face coverings that wasupheld by the European Court of Human Rights in 2014.

While some French feminists have thrown their weight behind these measures, others have vigorously opposed them, arguing that the focus on the veil has roots in French colonial history—and is being used as a tool for violence and discrimination against Muslim women. The well-known feminist Christine Delphy wrote in 2015, “Feminists are failing Muslim women by supporting racist French laws.”

Meanwhile, those feminists who are publicly condemning Muslim women have plenty of company, including Charlie Hebdo writers who survived a mass killing last year. The French satirical magazine published an article over the weekend claiming that all Muslims are responsible for acts of terror—and implying that women who cover their hair are hiding bombs. The outrage and despair this piece provoked was perhaps best captured by author and historian Teju Cole, who wrote: “Reading this extraordinary editorial by Charlie, it’s hard not to recall the vicious development of ‘the Jewish question’ in Europe and the horrifying persecution it resulted in.”

According to Assbague, “This is a very difficult time for us here in France. Communities are being targeted for who they are, whether they are Black, Muslim or Roma. Islamophobia is coming from the state, political leaders, intellectuals and a lot of journalists.”

Despite the climate of repression, massive protests against the state of emergency have swept France.

“We know we have to organize ourselves to fight for our rights, our freedom, for justice, and for the respect of our dignity,” Assbague emphasized. “We are trying to do our best, but it’s a lot of work and energy, and the government is policing us. Because right now, when you say something which is against the politics of the government, you become a suspect.”

*This article was updated to add information about Badinter’s ties to the public relations efforts of the Saudi Arabian government.

Sarah Lazare is a staff writer for AlterNet. A former staff writer for Common Dreams, she coedited the book About Face: Military Resisters Turn Against War. Follow her on Twitter at @sarahlazare.