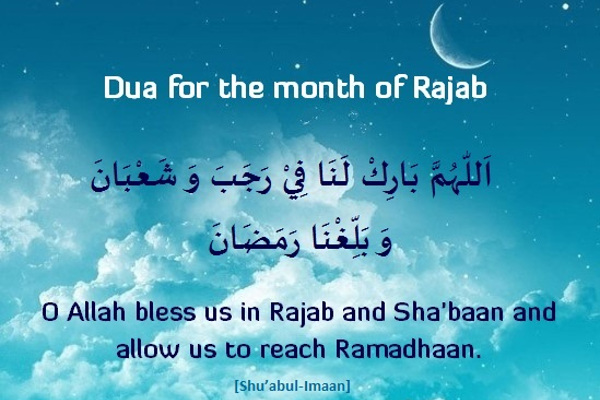 By the bounty of Allah we have just entered the blessed month of Rajab. Rajab is one of the four sacred months. It stands alone, unlike the other three which come together. The Prophet (may Allah bless him and grant him peace) said: “Rajab is the month of Allah, Sha`bān is my month, and Ramadan is the month of my Ummah.”[1] The fact that it is the month of Allah means that it is worthy of veneration, and the Messenger of Allah (peace and blessings be upon him) himself would venerate it. When the month entered he would seek its blessings, saying:
“O Allah bless us in Rajab and Sha`bān and enable us to reach Ramadan!”[2]

Rajab is the key to the months of goodness which follow it. For that reason Imam Abu Bakr al-Warraq said: “in the month of Rajab you sow the seeds, in Sha`ban you irrigate them and in Ramadan you reap the harvest.” He also said: “Rajab is like a wind, Sha`ban is like a cloud and Ramadan is like rain.”

Rajab was the month in which the Prophet’s blessed parents were married, and the month in which Sayyida Amina became pregnant with the Best of Creation (peace and blessings be upon him). Most of the scholars say that the Isra’ (Night Journey) and the Mi`raj (Ascension) took place on the 27th night of Rajab. This was the night on which the Messenger of Allah (peace and blessings be upon him) received the greatest ennoblement that a created being ever received from Allah.

When one of the pious scholars became ill he said: “I have asked Allah to delay my death until the month of Rajab because I have heard that those that die in that month are saved from the Fire.” Allah answered his supplication and he died in Rajab.

The First Night of Rajab

Rajab, the Month of Istighfār

The best way of preparing the heart to receive divine gifts is purification and repentance. For this reason the scholars say that Rajab is the month of seeking forgiveness, whereas Sha`ban is the month of sending peace and blessings upon the Prophet, and Ramadan is the month of the Qur’an. Thus it is recommended to seek much forgiveness in Rajab. Some of the scholars compiled special formulae of istighfar especially for Rajab, among them Habib Hasan the son of Imam `Abullah bin `Alawi al-Haddad.
In Tarim the following formula is read 70 times in congregation immediately after the `Isha Prayer every night in Rajab. The one reading it raises his hands while doing so:

Translation: “Oh Allah forgive me, have mercy upon me, and grant me repentance.”[4]

The reward of our good actions is multiplied in the sacred months, so it is recommended to do as many good deeds as possible. The Messenger of Allah (peace and blessings be upon him) recommended fasting at least some days in each of the sacred months. Some of the Companions, among them Sayyiduna `Umar and his son `Abdullah and al-Sayyida `A’isha, liked to make `Umrah in Rajab.
At the same time bad deeds are also more serious in the sacred months so we must do our utmost to avoid any wrongdoings.
A sacred month is similar to a sacred place. It is recommended to bathe and purify oneself before entering the haram of Mecca and while in it one is more conscious of the weight of one’s actions. Likewise with a sacred month – we try to enter it in a state of purity and we try to maintain that purity throughout through doing good and avoiding evil.
O Allah bless us in Rajab and Sha`ban and enable us to reach Ramadan. Peace and blessings upon the one who guided us to all good and warned us of all evil, our Master Muhammad and his blessed family and Companions and all those that follow his guidance until the end of time.

[4] Narrated by Wahb bin Munnabih who said that if someone reads this every morning and evening in Rajab the Fire will not touch his skin.