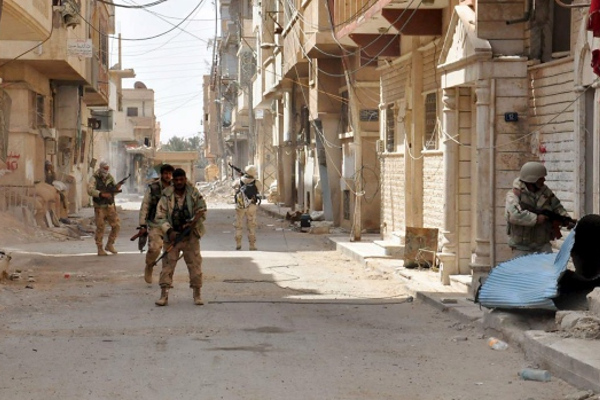 ISIS militants have suffered a series of reversals in northern Syria, both at the hands of rebel fighters and forces loyal to President Bashar al-Assad, that saw the terror group lose control of strategic territory bordering Turkey and withdraw from a town southeast of Homs, according to rebel fighters and political activists.

The clashes coincided with renewed targeting by U.S.-led coalition warplanes of ISIS positions in the northern Aleppo countryside and airstrikes from Russian warplanes in eastern Syria that reportedly left at least 40 militants dead.

Coming just days after Russian-backed regime forces recaptured the town of Palmyra from the militants, the accumulating battlefield losses for the terror army represent a serious setback for an organization that once boasted it would “remain and expand.”

Palmyra, known as the City of Palms, was an important way station along with its modern concrete neighbor of Tadmur on the ISIS supply line from Iraq’s Anbar province to Homs province in Syria through the city of Deir al-Zor.

ISIS has failed to pull-off a successful large-scale ground offensive in Syria since May 2015 when it captured Palmyra after a lightning offensive across the desert and has lost more than a fifth of the territory it once controlled in the war-savaged country, U.S. officials and independent analysts calculate.

Earlier this month analysts at IHS Jane’s 360, a British defense consultancy, concluded the tide has turned decisively against the extremist organization in Syria.

The latest ISIS losses saw anti-Assad rebel fighters from rival opposition alliances repel a jihadist offensive in the northern Aleppo countryside and then seize several key areas from the jihadists including the town of al-Kamaliya on the Syrian-Turkish border.

“More than 15 militants were killed” in the clashes with militiamen from the Sultan Murad Squad, al-Mutasam Brigade and the Levant Corps, said rebel spokesman Saleh Zein.

ISIS positions in the towns of Tel Shaeer, Soran and al-Ahmadiya also came under rebel shelling and were targeted in U.S.-led airstrikes, rebel commanders say.

And according to the Syrian Observatory for Human Rights, a British-based pro-rebel monitoring group that relies on its information from a network of activists, ISIS fighters withdrew from their last remaining redoubts in the eastern districts of the city of al-Qaryatayn in Homs province following fierce clashes with regime forces.

The Observatory said Assad regime troops had not entered yet the relinquished districts, fearing the militants had planted mines and explosive devices. After regime forces took Palmyra on March 27 Russian engineers deployed first to search for booby-traps.

The regime offensive on the mainly Christian town of Al-Qaryatayn was started by regime forces on March 3. Its location is strategic and was once used by anti-Assad rebels as a transshipment point to smuggle arms from northern Syria to militias fighting around Damascus. The recapturing of Al-Qaryatayn was overseen by Russian special forces advisers redeployed from the assault on Palmyra, pro-regime media outlets reported.

According to analyst Chris Kozak of the Washington-based think tank the Institute for the Study of War, more than 5,000 regime reinforcements have been deployed in the eastern part of Homs province, hundreds of them Shi’ite fighters from Lebanon and Iraq and Iranian-trained irregular Syrian militiamen.

“These redeployments were enabled in part by the ongoing ‘cessation of hostilities’ which allowed the regime and its allies to withdraw troops from its front-lines with opposition groups,” he said.

With military pressure mounting on ISIS and battlefield setbacks accumulating briskly there are signs of increasing lawlessness in the group’s stronghold of Raqqa, where activists from the anti-ISIS network Raqqa is Being Slaughtered Silently say there has been a sharp rise in robbery and thefts — an indication that the tight control ISIS has on the city may be slipping amid a manpower shortage. It has been press-ganging local youngsters into joining, say activists.

The terror group has reacted to dissent and robbery with a spate of gruesome executions. Since Wednesday, when coalition warplanes killed a top ISIS commander Abu al-Haija, one of a string of high-ranking jihadist leaders in recent weeks targeted by the U.S.-led coalition, 15 of the group’s lower-ranking commanders have been executed. They were accused of revealing Abu al-Haija’s position to the coalition.

“This is the highest number of executions of security officials by ISIS,” according to Abdel Rahman of the Syrian Observatory for Human Rights. Activists also report another person was executed Sunday in Raqqa on charges of “espionage.”

ISIS militants also reportedly executed eight young men in the Mansoura district west of Raqqa. Rights activist Nadeem Mahmoud told local news outlet ARA News that the men were shot dead and hung on electricity poles. They had been detained for more than a year by the terror group.

Some were former ISIS members who had tried to flee; others were accused of corruption and theft.