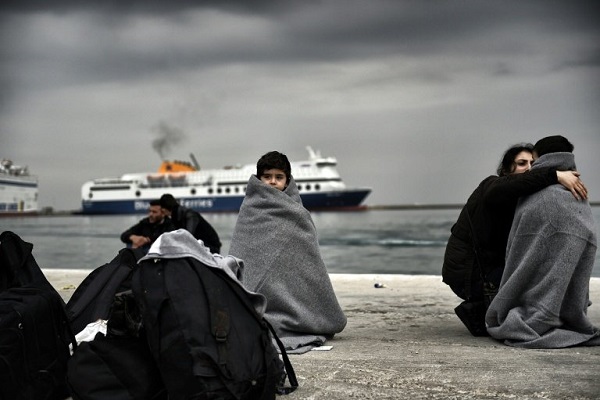 LESBOS – Ahmed and Mustafa were soldiers in the Syrian Army, but they didn’t want to kill their fellow countrymen.

They fled their army, their country and then, like more than a million others, survived a rubber boat across the sea to Europe.

Now they are locked inside what was once a refugee camp, terrified they will be deported back to Turkey. “It’s dirty and crowded here,” explains Mustafa. “But it’s better than going back.”

“Everyone here is afraid,” says Ahmed.

The European Union-Turkey plan to slow the flow of migrants to Europe is expected to go into effect Monday, with the expulsion of hundreds of refugees and migrants to Turkey. There will be as many soldiers as refugees on the ships, according to local news.

Already Pakistani travelers are being deported to Turkey, according to aid workers and refugees. Handcuffed and surrounded by soldiers and police, they are loaded on buses and shipped to northern Greece, before leaving the country.

The U.N. refugee agency says its not opposed to deportations on principle, but it doesn’t support the plan as-is. Well-managed expulsions of illegal immigrants is an established part of a well-functioning refugee system, according to Boris Cheshirkov the, UNHCR spokesperson on Lesbos.

“Our opposition is to the lack of clear safeguards right now as we implement this deal,” he says, sitting on a bench a few meters away from the port. “We need to see the capacity of the Greek asylum system expanded.”

To manage deportations humanely, he says, there needs to be an individual appeals process for people to argue their case to authorities.

At the detention center, refugees say no one there knows who will be taken or how they will be chosen. And for some, like Mustafa, who is traveling with his wife and two children, the idea of being turned back towards Turkey, is heartbreaking.

“My brother and my sister are in Germany,” he says. “I am supposed to be with them.”

On Saturday, a small group of young men and women from Morocco, Egypt, and Syria gather on the hill over the port to watch the boats depart.

First, they see a bus surrounded by at least 100 police and soldiers pull into a ship going north. It has to be Pakistani travelers, they say. Other expulsions don’t start until Monday.

Then, they watch as the boat to Athens departed without them.

The young people are among the few hundred refugees or migrants that remain outside the detention center. The police know where they live, a makeshift camp by the sea not far from town.

“On Monday we all have to go to Moria,” says Hesham, explaining that authorities have ordered them to leave their camp, where they are free to come and go, and move to the detention center.

“It is not a camp, it is a jail,” says Abdelkhader, a teenager from Syria, as the boat to Athens pulls out of view. “There is no freedom in Greece.”

In recent months, hundreds of thousands of dollars has been poured in to creating the infrastructure to help refugees in Lesbos.

Volunteers from all over the world have been rotating at the beaches and camps, greeting newly arrived rubber boats with emergency blankets and warm clothes or helping them keep fed and clothed, before they once again depart.

Now, volunteers wait for boats that are more often than not towed by authorities directly to the port, where police buses take the people to be detained, bypassing humanitarian workers. And when the boats land on shore, police buses often arrive soon after.

“It’s sad,” says Margaret Woodfall, a volunteer for Lighthouse Relief, who brought her family with her from Canada so they could help refugees. “There’s huge resources here that could be used, and the people are crowded into camps.”

A few minutes later, her group walks to the rocky beaches of Lesbos’ north coast. They continue the arduous task of removing the rubber boats and life jackets that stretch as far as the eye can see.

Woodfall, like many volunteers, plans to travel to the capital Mytilini to watch when the first groups of refugees are deported. The expected presence of volunteers and aid workers from the island has been described as both a protest and a show of support for the deportees.

“I think it is crazy,” she says. “It goes against all the convention on refugees,” she further explains, referring to international laws that prohibit forcibly returning refugees to the dangerous situations they fled.

Amnesty International has accused Turkey of forcing Syrians and Iraqis back to their countries, and says the European Union is in danger of ignoring and encouraging serious human rights violations by sending people to Turkey.