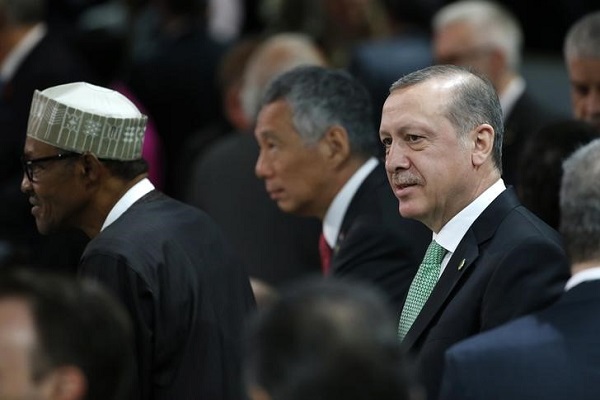 LANHAM, Maryland (Reuters) – Islamophobia is on the rise in the United States and U.S presidential candidates have targeted Muslims during the election campaign, Turkish President Tayyip Erdogan said on Saturday.

Erdogan, a pious man who has styled himself as a champion for Muslims in Turkey and beyond, spoke at the opening of a Turkish-sponsored mosque near Washington, reportedly the largest Muslim house of worship in the United States.

“There are still people walking around calling Muslims terrorists. I am watching with bewilderment and astonishment that some candidates still defend this position in the current presidential election in America,” Erdogan said.

Republican candidates in the U.S. presidential race have sparked accusations of Islamophobia. The party’s frontrunner Donald Trump has called for a temporary ban on Muslims entering the United States, while his main Republican competitor Ted Cruz has said police should patrol Muslim neighborhoods in the country.

“Unfortunately, we are in a period of rising intolerance and prejudice toward Muslims in the United States and the world,” Erdogan said. “It is absolutely unacceptable to make all Muslims pay the price for the pain and horror” of the attacks on America on Sept. 11, 2001, he said.

Erdogan also said recent the recent attacks claimed by Islamic State in Brussels and Paris paled in comparison to what Turkey had endured battling Islamist, Kurdish and left-wing extremists.

“There is terrorism in Brussels and Paris now, but let’s not forget it is incomparable with the level of terrorism in Turkey,” he said.

Erdogan also reiterated his claim that Turkey had notified the Belgian government of the identity of one of the perpetrators of the Brussels attacks last month that killed 35 people and that the authorities had dismissed Turkey’s warning.

Islamic State has carried out four bomb attacks in Turkey since June that has killed about 150 people. Turkey has also fought a Kurdish insurgency that has claimed more than 40,000 lives since 1984.

The Ottoman-style mosque where Erdogan spoke is part of a complex that Turkish media says is the largest campus of its kind, including a conference center, library, lodgings and a Turkish bath.