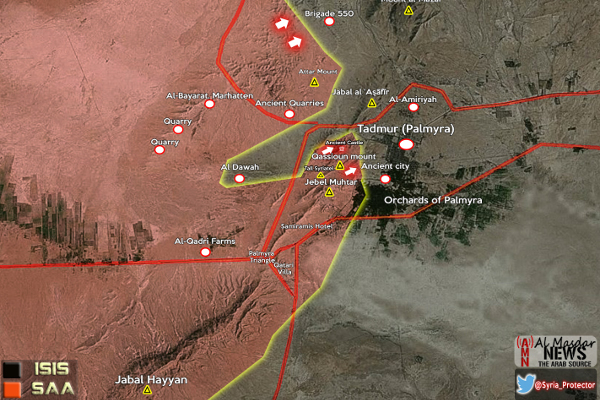 Syrian government forces, backed by Russian forces, have recaptured the historic Syrian city of Palmyra from the ISIS (IS) extremist group, state media and a monitoring organization say.

Syrian television announced on March 27 that the army and its militia allies took complete control of the city of Palmyra and were clearing mines and bombs set up by the militants.

The Syrian Observatory for Human Rights, a British-based monitoring group, said that there was still gunfire in the eastern part of the city early in the morning on March 27 but the majority of the Islamic State forces had pulled out and retreated east.

Retaking the town is a major symbolic and strategic victory for President Bashar al-Assad’s government, which has made steady gains in recent months against IS and opposition rebel groups.

The road linking Palmyra to Raqqa, an ISIS stronghold, is now under army control which means that ISIS fighters can only retreat eastwards towards the Iraqi border.

Despite Russia’s announcement that it was pulling out most military forces from Syria two weeks ago, Russian jets and helicopters carried out dozens of strikes over the ancient city at the height of the fighting.

Rami Abdulrahman, head of the British-based Observatory, said that 400 Islamic State fighters and 180 government troops and allied militiamen died in the fighting for Palmyra.

Islamic State fighters were driven out of the Iraqi city of Ramadi only three months ago, a major victory for Iraq. They also lost the Iraqi city of Tikrit last year and the Syrian town of Al-Shadadi in February.

On March 24, the Iraqi army announced that it will launch an offensive to retake Iraq’s second largest city, Mosul, which has been under IS control since June 2014.

Many of Palmyra’s Roman-era relics, including the 2,000-year-old Temple of Bel and the iconic Arch of Triumph, have been blown up by IS, claiming they promote “idolatry.”

UNESCO has called the campaign of destruction a war crime punishable by the International Criminal Court.

With reporting by AFP, AP, dpa, and Reuters