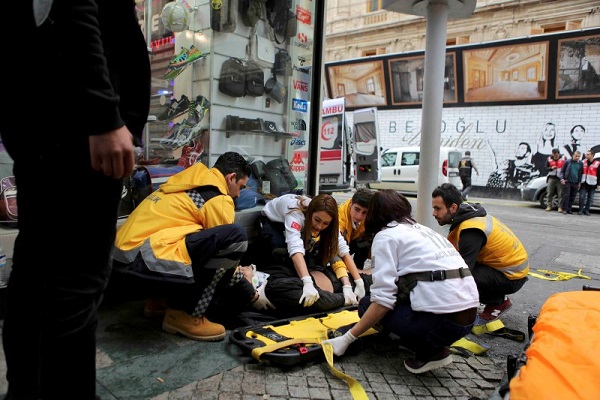 A man is helped by emergency services members following a suicide bombing in a major shopping and tourist district in central Istanbul March 19, 2016. REUTERS/Kemal Aslan

The city of Brussels was rocked by explosions Tuesday morning, leaving at least 30 people dead and 230 injured. The Islamic State has claimed responsibility for the attack which came just days after Paris massacre suspect Salah Abdeslam was apprehended in the Molenbeek district of Brussels. The most recent spasm of European violence has already sent ripples of grief in media and Facebook feeds around the world.

Just days before all this, however, there were actually not one, but two bombings you may not have heard about — both in Turkey.

heart bleeds for Belgium but it makes me sick that noone reacted likethis for Turkey #PrayForBelgium #PrayForAnkara https://t.co/gXl2K02vwL

On March 13, a car bomb in the capital city of Ankara exploded leaving at least 37 people dead and more than 100 injured, according to the Turkish health ministry. On Saturday, an ISIS-connected suicide bomber killed at least four in a busy tourist area in Istanbul.

But people are asking, where is the show of global solidarity for Ankara that there was for Paris, and there is right now for Brussels?

Or, in the words of Facebook user and Ankara resident James Taylor on the day his city was attacked: “You were Charlie, you were Paris. Will you be Ankara?”

In fact, the global reaction to Turkey’s deadly violence has been so muted that some people online felt compelled to speak out, some last week and some after Tuesday’s attacks in Brussels.

“Can you imagine the victims? The teenagers catching the bus to go home, the grandparents walking into town, the people waiting for a taxi after a long day laughing and socializing in the sun,” Taylor asked in his March 13 post. “It is very easy to look at terror attacks that happen in London, in New York, in Paris and feel pain and sadness for those victims, so why is it not the same for Ankara?”

Media (and social media) bias has been present in coverage of a number of terrorist attacks in Western countries, leaving in their shadows the stories of similar attacks in Muslim or developing countries. A day before the Paris attacks that left 130 dead, 43 died in a bombing in Beirut that went almost unrecognized. And in January 2015, the 17 left dead after an attack on the Paris office of satirical newspaper Charlie Hebdo obscured the roughly 2,000 killed by the Islamic militant group Boko Haram in the Nigerian town of Baga.

While coverage imbalances are often corrected after the fact, the latest example from Turkey shows it continues to be a potent issue.