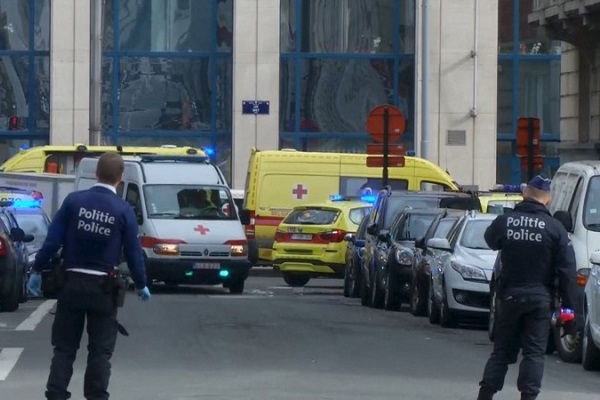 Emergency personnel are seen at the scene of a blast outside a metro station in Brussels, in this still image taken from video on March 22, 2016. REUTERS/Reuters TV

PARIS/WASHINGTON – Islamic State (ISIS) claimed responsibility for three explosions that rocked Brussels Tuesday morning – two at the airport and one at a metro station in the heart of the Belgian capital, killing at least 30 people and injuring 130 others.

“This is a black moment in our country…everyone please be calm and show solidarity,” Belgian Prime Minister Charles Michel told reporters.

U.S. President Barack Obama reacted to the blasts during a speech in Havana, saying “We will do whatever is necessary for our friend Belgium to bring those who are responsible to justice.” The President said the United States stands in solidarity with Belgium “for the outrageous attacks against innocent people.”

Video footage from the scene showed people fleeing the Zaventem airport, as a double explosion at about 8 am local time shattered the massive windows, leaving glass and tile scattered on the airport floor and smoke curling into the chilly morning air. Local media reported a third unexploded bomb had also been discovered.    Various news reports say at least 11 people were killed in the airport blasts.

A Belgian prosecutor said at least one blast at the airport was probably caused by a suicide bomber.  Local media also reported shouts in Arabic at the airport before the explosions. A European security official said one or possibly two Kalashnikov rifles had been found at the site of the airport attack.

Brussels’s mayor said at least 20 people were killed and 55 injured in an explosion just moments later at the at the Maelbeek subway station near the main headquarters of the European Union.  EU personnel have been told to either stay in their offices or at home.

Local media described people emerging from the metro with burns and wounds and panic on the street.

Belgian authorities have raised the nation’s terror alert level to its maximum level.  All flights in and out of the airport have been cancelled, and Brussels subway system has been shutdown as well.

Alison Corney, a freelance interpreter for the EU, told VOA many people were walking home and traffic was backed up because of the complete shutdown of public transportation.

Authorities in Frankfurt, London, Paris and Holland have boosted security at their airports in response to the Brussels’ bombings. The White House said U.S. officials were in close contact with their Belgian counterparts.

The explosions come just days after the arrest of key Paris attacks suspect Salah Abdeslam in Brussels that have raised fears of revenge attacks to follow.

Max Abrahms, a political science professor at Northeastern University who focuses on terrorism, said the blasts were likely part of operations that were planned prior to the arrest.

“They were in the works and quite likely they were expedited in the immediate aftermath of the capture,” he told VOA.

“There’s an incentive for these kinds of terrorist groups to strike back immediately after an apparent loss to the organization in order to communicate that the group isn’t dead,” he said.

The attacks also bring to mind the November 13 bombings and shootings, claimed by Islamic State, that took place in several places around the French capital.

A connection between the attacks and the arrest of Salah Abdeslam could be “extraordinarily significant,” said Daveed Gartenstein-Ross, Senior Fellow, Foundation for Defense of Democracies.

“We’ve all known or at least suspected this was coming for some time,” Brussels resident Stephen Dau told VOA in an email. Dau boarded a train around 9 am and went one stop before the train stopped abruptly and the conductor ordered passengers to disembark.

“It was orderly. There was no panic, although there was a definite sense of urgency as we walked out,” said Dau, who was informed afterwards about the explosion two trains ahead of his train.

“I haven’t noticed even a whiff of fear on the part of the general population, and we’ve had armed troops on the streets for months, ever since the Paris attacks,” he said.

Fareed Ashraf told VOA Urdu he heard a blast shortly after entering the subway station of Maalbeek. He said he saw about 15 to 18 dead bodies and dozens of severely injured people, adding “ we were fearing terrorist attacks and that has now happened”.

A passenger called Veronique who had been waiting to register for a flight to France, described the chaos inside the Brussels airport.

“There were lots of military around with their dogs. I heard the sound of a door closing and a dog running and then it exploded and then we all started running,” she told French radio, with sounds police sirens ringing behind.

Passengers described the blasts taking place at a Starbucks cafe and in the terminal for flights to the United States.

“We were 3 hiding, we didn’t know whether to come or go,” another airport passenger who hid with others during the blasts told France’s BFMTV.

Katherine Gypson is a reporter for VOA’s News Center in Washington, D.C.  Prior to joining VOA in 2013, Katherine produced documentary and public affairs programming in Afghanistan, Tunisia and Turkey. She also produced and co-wrote a 12-episode road-trip series for Pakistani television exploring the United States during the 2012 presidential election. She holds a Master’s degree in Journalism from American University. Follow her @kgyp