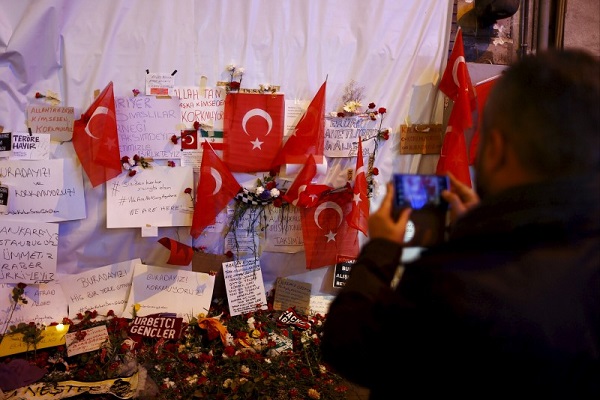 A man takes photos of tributes left at the scene of a suicide bombing at Istiklal street, a major shopping and tourist district, in central Istanbul, Turkey March 20, 2016. REUTERS/Osman Orsal

ISTANBUL (Reuters) – Turkish newspapers carried front-page pictures on Monday of three more men believed to be planning suicide bomb attacks for Islamic State, after a suspected member of the radical militant group killed three Israelis and an Iranian in Istanbul.

Sunday’s attack on Istiklal Street, a long pedestrian avenue lined with international stores and foreign consulates, was the fourth suicide bombing in Turkey this year. Two in Istanbul have been blamed on Islamic State, while the two others in the capital Ankara have been claimed by Kurdish militants.

The attacks have underscored Turkey’s struggle to prevent spillover from the war in neighboring Syria and have raised questions at home and among NATO allies as to whether its security services are overstretched as they fight on two fronts.

At least half a dozen newspapers from across the political spectrum carried head-and-shoulders pictures of three suspected Islamic State members, saying they had been given instructions to carry out further attacks in crowded areas, primarily in Istanbul.

“All provincial police units have taken action to try to capture the three terrorists suspected of being Islamic State members planning sensational attacks,” the state-run Anadolu news agency said, citing unnamed security sources and describing them as part of an “active cell” in Turkey.

Turkey is part of a U.S.-led coalition against Islamic State in Syria and Iraq, but is also battling Kurdish militants in its southeast, a conflict President Tayyip Erdogan sees as fueled by Kurdish militia gains in Syria.

Interior Minister Efkan Ala on Sunday identified the Istanbul bomber as a man born in 1992 and from the southern province of Gaziantep near the Syrian border, adding that five people had been detained so far in connection with the blast.

Israel has confirmed that three of its citizens died in the blast. Two of them held dual citizenship with the United States. An Iranian was also killed, Turkish officials have said.

Israeli Prime Minister Benjamin Netanyahu has said Israel is  trying to determine whether its citizens were deliberately targeted. Eleven of the 36 wounded were Israelis.

Turkey’s Haberturk newspaper said police had been examining CCTV footage and that it appeared the suicide bomber had followed the group of Israeli tourists for several kilometers from their hotel, then waiting outside the restaurant where they ate breakfast before blowing himself up as they emerged.

In his first public appearance since the bombing, Erdogan said on Sunday Turkey would not give in to militants.

“We will never surrender to the agenda of terror. We will defeat the terrorist organizations and the powers behind them by looking after the unity of our nation,” he said.