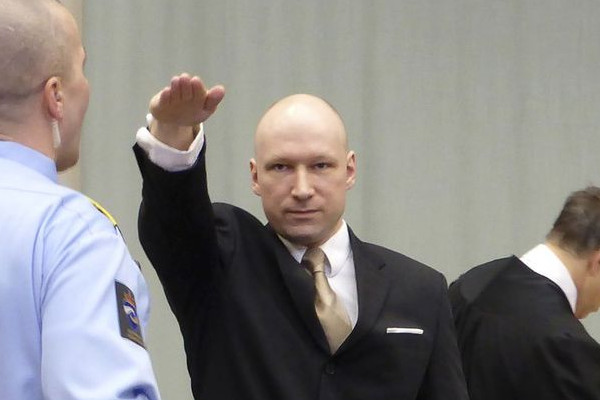 “Lone wolf” or “mentally unstable” are terms often used to describe white men who perpetrate acts of brutal terror and murder. You see, there is something about those men that protects them from being referred to by that malevolent term used so liberally by the media as well as politicians in this age of “Islamist hysteria”: the term “terrorist”.

Jailed Norwegian far-right terrorist Anders Behring Breivik, who killed 77 people in 2011 when he bombed central Oslo before going on a shooting spree at a Labour Youth camp on the island of Utoeya, returned to court today to argue that his prison isolation violates his rights.

He may still be in prison, but today he was pardoned from being referred to as a “far-right terrorist” by many media outlets, instead relegated to the rank of “murderer” or “mass murderer”.

Why is this the case, when Breivik is to all intents and purposes the archetypal terrorist, a cold-blooded murderer who committed vicious and violent acts for an extreme political cause? The Nazi salute that he gave in court today signifies that perfectly.

The answer and reason is simply because of the fact that a white terrorist receives privileged consideration in the media. In contrast, the “terrorist” moniker is one that is exclusively reserved for those who don’t come from within, those who are looked upon as society’s dangerous “others”. Nowadays, that “other” is almost always a Muslim.

People in power and positions of influence are quick to call those like Isis’ knife-wielding Jihadi John and Seifeddine Rezgui, the 23-year-old man who shot dead 38 people on a beach in Tunisia, terrorists – and rightly so. But when that same epithet is spared people like Breivik, we have a serious problem.

An explanation for this imbalanced portrayal is that terrorists are not meant to be those from the “inside”. No, terrorists are those who “hate our democracy, our freedom, our freedom of expression, our way of life” – a quote from British Prime Minister David Cameron after the attacks on satirical magazine Charlie Hebdo last year in Paris, and a phrase we hear frequently from other leaders.

Terrorists come from faraway lands, waiting to infiltrate foreign territory with their “barbaric” ideologies. Acknowledging those like Breivik as extremists diminishes the ideal terrorist exemplar that has been built up over the years by the right-wing media and politicians alike. If any normal white westerner can be a “terrorist”, the structure breaks down.

Rarely are Muslim extremists given an open trial where their motives are explored in detail, the way Breivik was. The inference seemed to be that by questioning and inquiring rigorously we could understand his actions. Yet when academics, activists and political commentators try to understand and explain factors which have lead some Muslims to commit horrific acts of terror, those very individuals are disparaged and branded as “terrorist sympathisers”.

It is evident that our perception and understanding of what constitutes “terrorism” is warped. We are not allowed to decide who terrorises, us but rather expected to settle with the delineation given to us by the powers-that-be.

Anders Breivik is an isolated “mass murderer” who acted alone. Nobody will pressure his community to condemn people within its midst, examine their religion or ideologies, or reform their way of life. Considering the rise of far-right groups in Europe today, this fact is particularly damaging.

The Breiviks of the world are consciously separated from appellations such as “terrorist” to maintain the belief that only those who hold a certain set of beliefs ever qualify. But if we don’t condemn terrorism in all its forms, we can never learn from atrocities like the one committed on Utoeya five years ago.