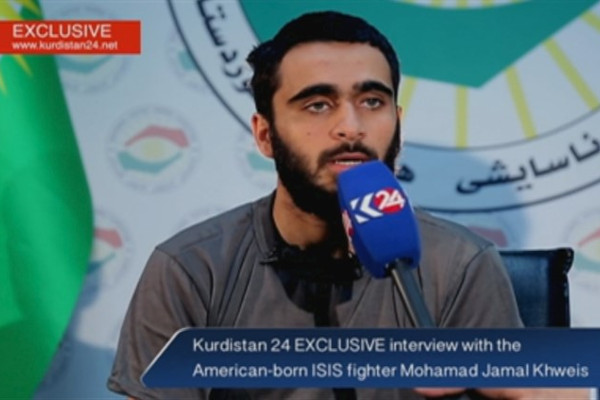 (Reuters) – A 26-year-old American man who was captured by Kurdish forces in Iraq earlier this week, said he had traveled from Turkey to join Islamic State before deciding to escape, according to an interview with Kurdish television on Thursday.

Two Kurdish militia officers said on Monday an American, bearded and dressed in black, had surrendered after being surrounded near the village of Golat, in northern Iraq. The man’s Virginia drivers license identified him as Kweis Mohammed Jamal.

In the video Kweis, looking healthy but subdued, recounted his journey from the United States to Mosul and then into the hands of the Kurdish Peshmerga.

Kweis said he traveled from the United States to London in December 2015 and continued to Amsterdam and then Turkey. In Turkey he met a woman from Mosul who said she could help him get to the Iraqi city, which has been under the militant group’s control since 2014.

“We got to know each other. She knew someone who could take us from Turkey to Syria and from Syria to Mosul,” he said.

After a series of car rides Kweis and the woman separated and Kweis continued with some Islamic State fighters who took him to Mosul. There he stayed in a house holding about 70 people, including foreign recruits, all of whom had to hand over their passports to the Islamic State.

The group included Russians, Uzbekis, Egyptians, Pakistanis, and Moroccans. Kweis said he was the only American.

“Our daily life was praying, eating and learning about the religion for about eight hours,” he said. “I found it very, very hard to live there.”

After a month, he decided to leave.

“I didn’t really support their ideology. And that’s the point when I decided I needed to escape,” said Kweis.

He found someone to take him as far as the Turkish border, where he could make contact with the Kurds.

“I made a bad decision to go with the girl and go to Mosul,” he said. “I wasn’t thinking straight and on the way there I regretted it.”

More than 250 Americans have joined or tried to fight with Islamic State in Syria and Iraq since 2011, according to a September 2015 bipartisan congressional taskforce report.

At least 80 men and women have been charged by federal prosecutors for connections to Islamic State, and 27 have been convicted.