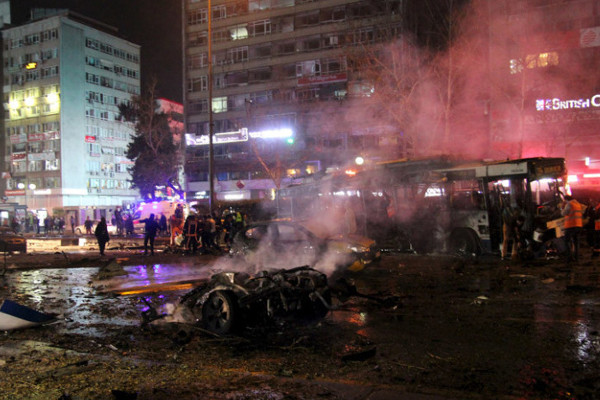 Nine F-16s and two F-4 jets raided 18 positions of the Kurdistan Workers’ Party, or PKK in the northern Iraq, including the Qandil mountains where the group’s leadership is based, the state-run Anadolu Agency reported. Targets hits consisted of ammunition depots, bunkers and shelters.

Health Minister Mehmet Muezzinoglu said three more people died overnight from wounds suffered in the Sunday night attack that targeted buses and people waiting at bus stops at the heart of Ankara. Scores of others were injured.

Police on Monday blocked the boulevard where the attack targeting buses and people waiting at bus stops occurred, as forensic teams scoured the road — which is Ankara’s main artery — for more clues.

A senior government official told the Associated Press that authorities believe the attack was carried out by two bombers — one of them a woman — and was the work of Kurdish militants. He spoke on condition of anonymity because the investigation is continuing.

It was the second deadly attack blamed on Kurdish militants in the capital in the past month and President Recep Tayyip Erdogan vowed to bring “terrorism to its knees.”

On Feb. 17, a suicide car-bombing in the capital targeted buses carrying military personnel, killing 29 people. A Kurdish militant group, which is an offshoot of the PKK, claimed responsibility.