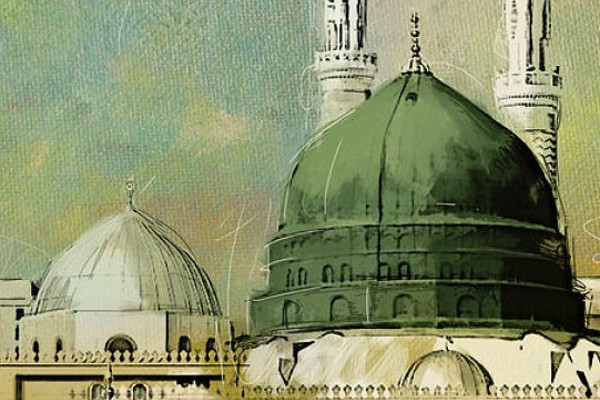 A smile can be described as a form of laughing where the teeth are only partially seen. Such was the smile of the Messenger of Allah (Allah’s peace be upon him).

His never laughed so much that his molars or palate became visible. In this regard, Aisha (upon whom be Allah’s pleasure) says that:

“I never saw the Prophet laughing to an extent that one could see his palate, but he always used to smile only.” (Bukharī, Kitāb al-Adab, 68; Muslim, Istisqā, 16)

According to many narrations of the Companions, the Prophet (Allah’s peace be upon him) had the best character and was the most courteous of the people. He was always smiling and his face was always shining with the light of his smile.

Abdullah b. Salām, a Jewish scholar, curiously approached the Prophet (Allah’s peace be upon him) to ask him something during immigration from Mecca to Medina. When he saw the Prophet’s face, he said:

A man’s face and apparel are a window into his mind and character. Every creature communicates through behavior and manners. In other words, a person “talks” about themselves through behavior, even if the mouth is shut.

Faces are the messengers of inner worlds of souls to the eyes. This is why a shining smile is so beautiful – it is but a reflection of a beautiful inner world or soul.

How nicely Jalal al-Dīn Rumī (Allah sanctify his soul) explains this in the following lines:

“If you would buy a pomegranate, buy (it when it is) laughing (having its rind cleft open), so that its laughter (openness) may give information as to its seeds. Oh, blessed is its laughter, for through its mouth it shows the heart, like a pearl from the chest of the spirit… The laughing pomegranate makes the garden laugh (bloom): companionship with (holy) men makes you one of the (holy) men. Though you be rock or marble, you will become a jewel when you reach the man of heart (the saint).”

The Messenger of Allah (Allah’s peace be upon him) passed by people slowly and smiling. He listened carefully to his companions in order to make them happy. He smiled with them showing only some of his blessed teeth. And his companions followed his customs and imitated his manners.

Narrated by Jarīr b. Abdullāh (upon whom be Allah’s pleasure):

“The Prophet did not screen himself from me (had never prevented me from entering upon him) since I embraced Islam, and whenever he saw me, he would receive me with a smile.” (Bukharī, Kitāb al-Adab, 68)

Abdullah b. Hārith said that:

“I have not seen anybody smiling more than the Prophet (Allah’s peace be upon him).” (Tirmidhī, Manāqib, 144)

Here are some more sayings of the Prophet (Allah’s peace be upon him) regarding the virtue of smiling:

“Don’t consider anything insignificant out of good things even if it is that you meet your brother with a cheerful countenance.” (Muslim, Kitāb al-Birr, 144)

“Every act of kindness is charity. Part of kindness is that you offer your brother a cheerful face and you pour some of your bucket into his water vessel.” (Tirmidhī, Kitāb al-Birr, 45/1970; Aḥmad b. Ḥanbal, III, 344; Bukharī, al-Adab al-Mufrad, no: 304)

When the Prophet (Allah’s peace be upon him) could not find anything to give to the poor, he used to turn his face away feeling embarrassed. Then the following verse was revealed:

“And if you turn away from them to seek mercy from your Lord, which you hope for, speak to them a gentle word.” (17; 28)

After the revelation of this Divine command, whenever the Prophet (Allah’s peace be upon him) could not find anything to give, he started to smile and talk nicely to the poor in order to win their hearts.

Therefore, smiling, greeting and talking nicely should not be belittled. These are some of the social acts of worship of every believing soul and smiling is a consistent and emphasized tradition (sunnah) of the Prophet (Allah’s peace be upon him).