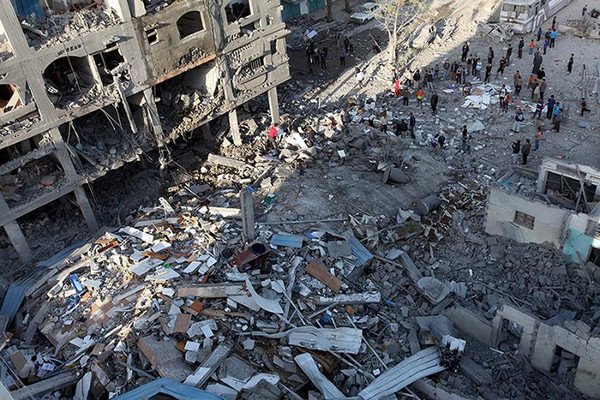 A boy and a girl were killed in Israeli airstrikes that targeted Hamas bases in the Gaza Strip in response to “Palestinian aggression”, local media claim, citing officials.

The Israeli Air Force launched an airstrike on Hamas bases on Saturday, March 12, in which a 10-year-boy who lived next to one of the targets was killed, Gaza Health Ministry spokesman Ashraf al-Qudra said, according to AFP. His six-year-old sister died later of her injuries, local media reported.

“We were sleeping when we heard an explosion and the ceiling went down. Our children were in another room. I heard a scream and rushed to them. They were sleeping all covered with blood,” the father of the children told RT.

The attack targeted Hamas’ military wing, the Ezzedine al-Qassem Brigades, who were stationed in Beit Lahiya. It came as a retaliatory strike for four Palestinian rockets that were fired on Friday but fell in open areas and caused no damage.

“In response to the aggression, the Israel Air Force targeted four Hamas sites in the northern Gaza Strip,” a military statement said.

“There have been seven rockets fired at Israel from the Gaza Strip since the beginning of the year.”

Though no organization claimed responsibility for the latest attack, Israel held the Hamas group responsible for the incident.

There were no immediate comments on the information about casualties on the Palestinian side from the IDF.

There is a new generation born used to wars, to losing parents, and a lack of electricity, and this must irreversibly affect children’s lives, Belal Dabour, who worked at Shifa hospital in Gaza during the 2014 war, said in an interview with RT.

“They [children] have never experienced normal life,” he said, adding that it is a very disturbing fact. The new generation may start looking for ways of telling the world that “they matter.” Some of these children may join the armed conflict and “Israel will have no one to blame but themselves.”

“If you keep depriving them of everything, eventually they will be called to it [the conflict],” Dabour noted, stressing that it’s important to provide children with psychiatric help after the hostilities are over, but right now there is not much that can be done.

Around 34 missiles have been fired from the coastal strip controlled by Hamas into Israel since the end of the 2014 Israel-Gaza conflict, according to military statistics. More than 2,000 people, mostly civilians, were killed in Israeli attacks, while Palestinians killed 67 Israeli soldiers and six civilians.