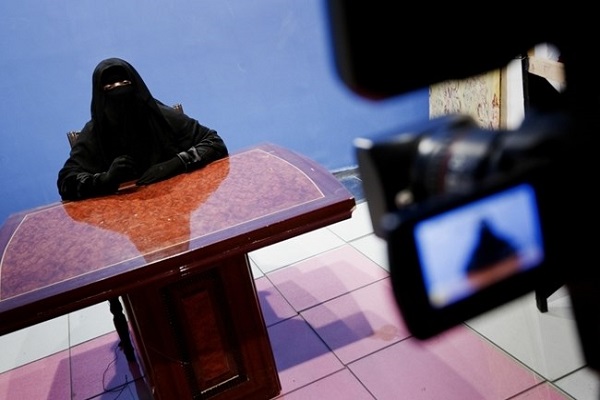 A presenter for Egypt's "Maria", a television station run by women in niqab.

An alliance of hundreds of Egyptian lawmakers is planning to push forward a bill to ban women from covering their faces for religious reasons, Gulf News reported Monday. The move comes months after Egypt’s leading public academic institution, Cairo University, banned female lecturers from donning the veil, citing security concerns and a need to improve communication between teachers and students.

“We seek to spread moderate Islam,” Amna Nuseir, a member of Parliament and a professor at Egypt’s theology-focused al-Azhar University, told the news website. “Wearing the niqab in public has raised concerns in the Egyptian streets in view of the hard circumstances the country is undergoing.”

The niqab, which covers most of the face, is worn by a minority of Egyptian women and is often associated with a more conservative understanding of Islam. Conservatives in the country have argued that wearing the face covering should be a matter of personal choice, but some religious scholars have criticized the covering as a pre-Islamic cultural or tribal practice — not a religious one. The majority of Egyptian women wear a hijab, a headscarf that does not cover the face.

“Banning the niqab will be a flagrant violation of personal freedom,” Abdul Moneim Fouad, also a professor at al-Azhar University, said. “Parliament has to enact laws aimed at bringing morals back to the street and stop [people] showing up in revealing dresses in public rather than banning the niqab.”

The ban, which would apply to state institutions and public places, is being endorsed by the Egypt Support Coalition, which claims to have 250 members in the legislature. There is no clear date for when a bill might come forward in Parliament.

Pushback against the niqab, largely by pro-government lawmakers, likely has a political dimension. The government of Abdel Fattah el-Sisi has repeatedly come under scrutiny for repressing opponents aligned with the Muslim Brotherhood, who often endorse a more conservative interpretation of religion. Sisi has often sought to contrast himself against the Muslim Brotherhood by advocating for reformation and moderation in Islam. Under his leadership, religious institutions have grown considerably more political.

The niqab has been the subject of heated debate in Egypt for years. Al-Azhar University, one of the world’s most renowned Islamic institutions, banned students and teachers from wearing the face covering in 2008. Mohammad Sayyid Tantawi, the school’s former leading religious scholar, said the niqab had nothing to do with Islam and was a sign of extremism.