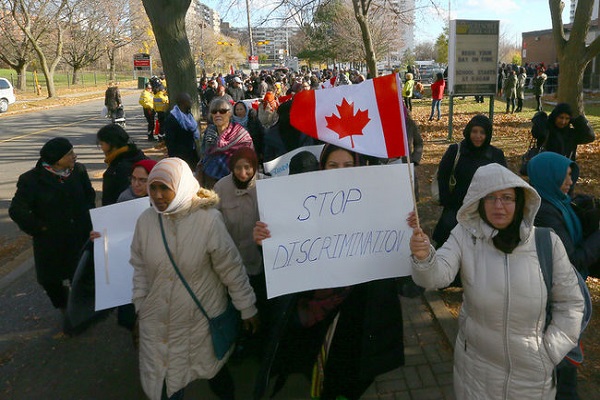 When I made the decision to move to Canada, I was terrified. I feared that I would not be able to get used to life here. It was less a factor of the differences in culture and language, and more due to the fact that I wear the hijab. My scarf is a symbol of Islam, a religion considered by the West as the religion of terrorism. I was haunted by anxiety.

Would people there accept me with my hijab? Would they talk to me or would they be afraid of me? How would I pursue my education and achieve my dreams, while people judge me based on stereotypes they get from the media? I tried to find answers to these questions, and I asked everyone I thought might have an answer, to no avail. I realized then that only experience would give me an answer.

En route to Canada, at Heathrow Airport to be exact, a woman stopped me and complimented me on my hijab, saying it was very pretty. I cannot describe how much her words calmed me down and warmed my heart. The compliment boosted my confidence in myself and my hijab, and reassured me.

“I was unintentionally showing them that the hijab did not make a woman ugly or scary.”

Once I arrived in Canada, my fear slowly started to fade. I didn’t feel that my hijab was causing any problems for me. On the contrary, it was something that distinguished me from other people. People would often compliment me on it, which made me happy. I was unintentionally showing them that the hijab did not make a woman ugly or scary.

In general, Canadians are loving people. They’re always smiling, and they don’t give off a racist vibe. I’ve encountered no trouble living with them. As I walk down the street, Canadian people stop me with a broad smile and greet me with the Islamic greeting, “Salam Aleykum” (Peace).

I do not deny that after the Paris attacks, extremists have attacked Muslims in a number of Canadian cities. However, the way Canadians treat me hasn’t changed. On the contrary, I have started to notice, after those attacks, that the Canadians I meet acknowledge that there is great gap between Muslims and terrorism. They are aware that Islam has no relationship to terrorists, who have no religion. Canadians know that we hate terrorism as much as they do.

“A Canadian person recently told me that when she sees a woman wearing the hijab, she is immediately reminded of whiteness, purity, decency and righteousness.”

Now, after spending around four years living in Canada, I have come to realize that the hijab is one of the values I hold dear. I chose it based on love and conviction, and I have been wearing it since I turned 12, so how could I not defend my hijab and my right to wear it? How could I feel ashamed of it, when after those four years, I have become completely convinced that my hijab boosts, rather than undermines, my success. I have become convinced that the strength of my values and the confidence I have in my choices make people accept and admire my hijab, whether or not they’re familiar with seeing it.

I currently study among Canadians and enjoy the same rights they enjoy. I do not sense any discrimination or racism. They treat me gently, lovingly, and compassionately. In my opinion, success is not limited to the individual’s personal and practical life. It is much deeper and broader than that. Success is about serving your society and your religion. These are the nobler goals that I am pursuing.

There is no doubt that wearing the hijab places a huge responsibility on Muslim women in the West. The hijab is a symbol of Islam. It conveys Islamic morals and paints the true picture of Islam. A Canadian person recently told me that when she sees a woman wearing the hijab, she is immediately reminded of whiteness, purity, decency and righteousness. This has shown me that many educated Westerners have a good understanding of Islam. They know that we are not terrorists.

“This is my message: Trust your hijab. Overcome your fear. Be true to your principles. The West respects and values people of principle.”

The hijab is a responsibility on the shoulders of a Muslim woman because it announces that she is a Muslim. For example, when my husband goes to work everyday, no one can tell that he’s a Muslim. This gives him the freedom to behave as he wishes. If he behaved badly, it would not be attributed to Islam. But if I was with him, everyone would know he was a Muslim. This means we always have to watch out for our behavior, so that we don’t ruin people’s impression of Muslims.

I am writing this to reassure every young woman who wants to come to Canada, but is afraid that her hijab would be an obstacle to her living her life freely and achieving her dreams fully. This is my message: Trust your hijab. Overcome your fear. Be true to your principles. The West respects and values people of principle. If success is your goal, you will succeed.

So do not let the hijab be an obstacle. Let it be an incentive. Prove to everyone that women wearing hijab can become whatever they want and can achieve their dreams.