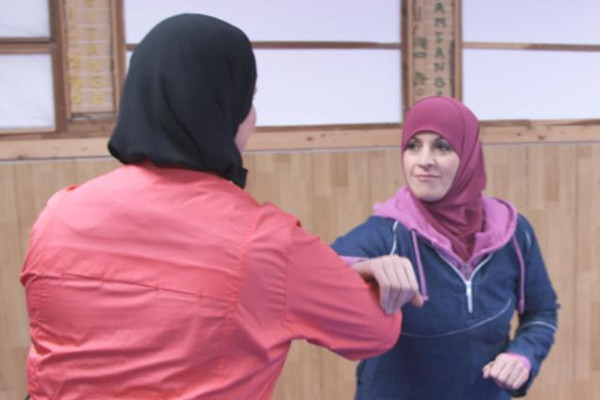 Sitting cross-legged in a Montreal North dojo, a group of Muslim women are discussing the best way to deal with getting your veil pulled off.

“I’ve been told to carry an emergency scarf with me,” one says. “Just in case.”

They laugh, but the hypothetical scenario is not a joke; this is a self-defense class designed specifically to help women deal with Islamophobic attacks, which have become increasingly common in recent years.

Teacher Salma Ahmad demonstrates one possible response to the hijab pulling. Swinging her arms up in front of her, she lets out a guttural scream.

“But they usually come up from behind,” one woman interjects, tugging on the back of her headscarf. The group around her nods in agreement, and Ahmad adjusts her instructions. She then has the women pair up to practice the tactic, and their initially shy yells crescendo into loud cries of protest.

The class is the brainchild of Hanadi Saad, the director of support group Justice Femme. In the past two years, she says her organisation has received a growing number of calls pertaining to Islamophobic assaults and discrimination.

“The incidents we hear about the most are physical attacks on the street or on public transportation,” she says.

“And most of the assaults are perpetrated by women.”

And the incidents are not just in Montreal. A number of high profile hate crimes have occurred across the country, some immediately after the Paris attacks, prompting condemnation from Prime Minister Justin Trudeau, who vowed Canada “will not abide innocent and peaceful citizens being targeted by acts of vandalism and intolerance.”

In Toronto last November, a Muslim woman was punched and called a terrorist while picking up her children at school; in a small Ontario city, a mosque was torched, while in Vancouver a group of Syrian refugees were pepper sprayed as they left a welcome event. Self-defense courses catering towards Muslim women have sprouted up across the country.

Because of the particular nature of the crimes, Saad says finding someone with the necessary qualifications was challenging.

“Existing self-defense courses deal with things like conjugal violence, and Montreal schools didn’t really want to change their curriculums,” she explains, adding that many of the teachers she contacted seemed uncomfortable addressing this type of religiously-motivated assaults.

Saad says Ahmad, who is Muslim, is in contact with people who have lived this type of discrimination, “so she’s aware of the issues. But I’d like there to be some awareness outside the community as well.”

Most of the assaults are perpetrated by women.’

Earlier this year, a survey on religious tolerance showed that nearly 50 percent of Quebecers were “very bothered” by Muslim head coverings. In contrast, only 5 percent were bothered by the crucifix, 25 percent by the kippah and 30 per cent by the turban.

This fear, which Saad says is largely manufactured by the media, has manifested itself through an uptick in Islamophobic behaviour. Most of it has been directed at women, who wear the most visible symbol of the religion.

“We get women calling us to say that they get discriminated against at work, by colleagues or bosses, or don’t get hired because of their veil,” she says. “There’s also housing, you’ll get a landlord who sees the hijab and says, I don’t want that here.”

Saad says authorities have yet to fully understand the phenomenon and tend to treat the harassment and attacks as simple assaults instead of as hate crimes. “The consequences of [these assaults] are so serious because you feel excluded from an entire society, you don’t feel welcome.”

Ahmad says her course addresses a very important and specific need. “I saw my sisters being scared of going out, being spit on, being attacked or insulted, within my own family as well,” she recalls. “I thought, what can we do so we can feel that we’re strong and that we have the right to be safe?”

The women attending this session are no stranger to the type of incidents Saad and Ahmad describe. Over the course of the hour-long session, they discuss various uncomfortable or dangerous situations — from online hostility to physical aggression — they or their loved ones have experienced.

Ahmad provides them with an array of possible approaches, all with a central thesis of empowerment: she coaches the women to be loud, to take up space, and to defy stereotypes that portray Muslim women as quiet and subdued.

“Someone who is assaulting you thinks that you are weak,” she tells her students. “You want to prove them wrong.” She gets the women to wave their middle fingers in the air, an exercise the group gladly takes part in.

When some of the women struggle with the concept of injuring the assailant  — “If someone hits you, you can hit them back?” they ask — Ahmad shows them what part of the neck to strike in order to interrupt blood flow, what part of the foot to crush to weaken the attacker.

Don’t hesitate to dig your heel into the bones above the toes, she instructs. “They’re very fragile, like little twigs.”