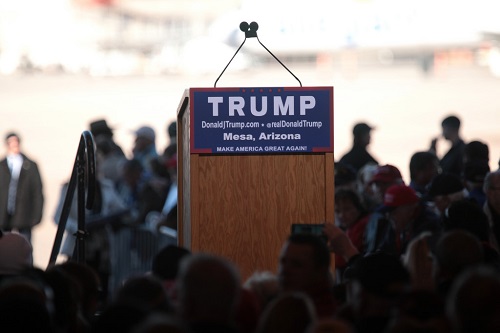 Property mogul and celebrity TV personality Donald Trump has fended off attacks from all sides to win big on Super Tuesday, reinforcing his lead in the race for his party’s nomination.

But what would a President Donald Trump mean for the Middle East?

Well, Trump drew the anger of Muslims worldwide when he declared that he would impose a ban on Muslims entering the US. But he has also vowed to be “neutral” in negotiations between Israelis and Palestinians, a significant break from long-standing US foreign policy favouring Israel.

The pre-Super Tuesday attacks seemed to come from almost every direction. He was denounced by President Barack Obama, and by the Republican Speaker of the House, Paul Ryan. Fellow Republican candidate Marco Rubio criticised him for failing to renounce support from former Ku Klux Klan grand wizard David Duke and praise from Nation of Islam leader Louis Farrakhan.

The Middle East: A US election battleground?

But Trump’s popularity seems to stem from his position as a political outsider among those dissatisfied with the political establishment’s handling of the economy and security.

If Hillary Clinton, the Democratic frontrunner, and Trump continue to hold on to their leads in the remaining 35 states and territories, voters may find themselves choosing not between a Democrat and a Republican, but between a veteran politician and political insider, and a successful businessman and political outsider.

The issue of Middle East peace may be pivotal in such a battle. And that could make Trump’s rise bittersweet to Muslims.

While Trump’s talk of a ban has undoubtedly angered Muslims, could his promise of neutrality in Israeli-Arab relations be enough to off-set this?

For the many American Muslims who are not Arab – and to whom Palestine is not such a central issue – this may mean little. But to Arab Muslim Americans, who have never experienced a US that seemed fair or balanced in its dealings with Israel, it could help to ameliorate some of that anger.

Trump would, if he were to follow through on his campaign rhetoric, be challenging the US’ long-standing pro-Israel bias and rejecting the influence of Israel’s powerful AIPAC lobby. That would be unprecedented.

Until now, presidential election contests have seen candidates arguing about who is more pro-Israel.

Cruz has repeatedly said that anyone who criticises Israel is “un-American” and asserted at a conference of Christian Arabs that “those who hate Israel also hate America”.

It is very possible that Trump’s Middle East positions may reflect his long-standing business rivalry with Adelson, whose Las Vegas hotel and casino is just a short distance from Trump’s.

Trump and the Iraq war

Trump may also have appealed to Arab American voters when he criticised the Iraq war – saying that it destabilised the Middle East and fuelled the spread of al-Qaeda and the rise of the Islamic State of Iraq and the Levant (ISIL) – although his claim that he had opposed it before the invasion has been widely disputed.

Still, Trump’s position on Iraq could put Clinton on the defensive. Despite criticising the Iraq War, as a senator at the time she voted in favour of the 2002 resolution introduced by President George W Bush to authorise the American invasion.

Trump’s views on the Middle East could pose a problem for Clinton in other ways. Her husband, President Bill Clinton, has been accused of undermining his pursuit of Israeli-Palestinian peace when he tried to force Arafat to abandon the right of return and claims to Arab East Jerusalem during negotiations at Camp David in 2000 with the Israeli Prime Minister Ehud Barak. Many believe the proposals were designed by Barak and pushed by Clinton.

It may be unorthodox, but Trump’s strategy of telling voters what he thinks in the moment seems to be appealing to those disenchanted with the country’s political elite. Polls have shown a record turnout for Republicans, while Democratic turnout has slumped compared with 2008, the party’s last competitive primary season. Trump is a big factor in that.

But while many things can change before the primary election process comes to a close, Trump seems to have tapped into a public desire for change. Whether that will lead to a change in how the US views the Middle East remains to be seen.