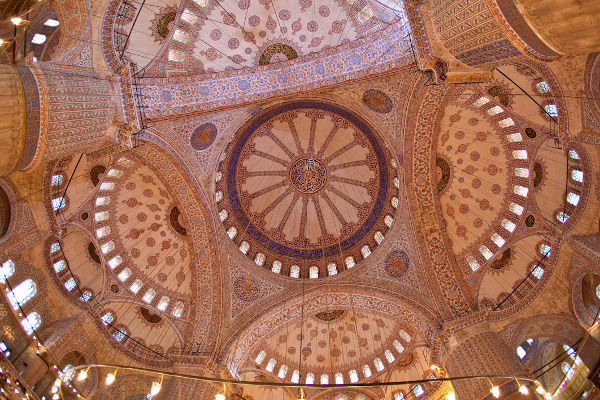 One of the most widely observable works of fine art which stand testimony to the influence of Sufism (the science of Islamic Spirituality) is indeed architecture. Architecture comes into existence through the combination of mathematical, geometrical and spiritual talents human beings have which is then melted in a harmonious pot. In other words, architecture represents intellectual and spiritual abilities of man reflected onto and embodied in material things, like stone and wood.

Sufism has had a decisive influence on Islamic architecture in more ways than one. We can, for instance, observe this influence vividly in Suleymaniye Mosque and the complementary buildings that surround it. Peering into this architectural masterpiece through a Sufi eye reveals that the spirit of Islam is deep impressed thereon. Its eye-catching magnificence is combined with a profound spirituality, symbolized with many spiritual facets peeking through every inch of the mosque. So skillfully designed are the central dome of the mosque and its surroundings that starting from its foundations up to the dome we can see a gradual symbolic progression multiplicity to unity, to the One (Wahid); the dome which seals the building. The harmony of the central dome with the other domes is quite extraordinary, signifying the Sufi principle ‘unity within multiplicity, multiplicity within unity’. The Suleymaniye Mosque thus attractively embodies a series of elegant marks of spirituality, remarkably epitomizing the transition from the multiple to the majestic ‘One’, and vice versa. In echoing the recitations of the Holy Quran and prayers performed in the mosque, the same dome also symbolizes the Blessed Prophet -upon him blessings and peace- and his function of delivering the Divine message to his followers.

This unique mosque is virtually the meeting point of astonishing human genius and capacity. Tranquility kneaded into majesty in the most consummate fashion has brought a superbly harmonious monument of architectural beauty into existence. With its graceful minarets moving up to the sky, the mosque is like a devout servant who has submissively raised his hands aloft to pray to the Lord.

The internal atmosphere of the Suleymaniye Mosque also casts a profound influence on the human psyche. Many visitors of different religious backgrounds admiringly express the spiritual attraction they feel inside the ambiance of this colossal temple and the comforting inner peace and tranquility that comes over them. It is narrated that the mosque was built on the basis of an order received, in a dream, from the Blessed Prophet -upon him blessings and peace-.

In contrast to mosques of the caliber of Suleymaniye which were built to last until the Final Hour, various types of Sufi institutions such as dervish convents, lodges, and public kitchens served to spiritually enrich the scene of Muslim towns in a different manner. Great and small, many buildings of this type inspire a sense of perishability, simplicity, nothingness, and modesty. They were built in accordance with their function, which means they were spacious enough to facilitate Sufi training; yet they have always been far from giving a sense of majesty, having been built with the intention of inspiring the sense of perishability, instead. Nevertheless, all these buildings offer a display of the manifestations of Islamic spirituality embedded architecture.