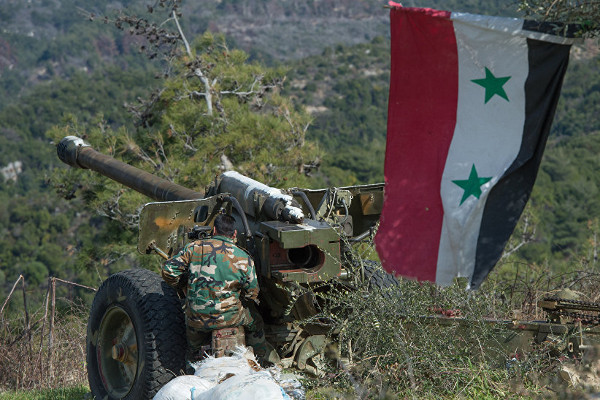 The Pentagon has a lot of money to spend on propaganda. But its white-washing Russia out of progress in Syria has an increasingly propaganda-savvy audience howling, and is a poor use of resources.

This week, the Pentagon information machine made some pronouncements which saw the light of day in media outlets which included AOL and the Daily Mail.

In materially identical pieces, US Army propagandist Colonel Steve Warren fires off several rounds of bullet points to the effect that Islamic State is “beginning to crack” under the “onslaught of air strikes and counter-terror measures”, and that would-be jihadis are realising that “this caliphate isn’t all unicorns and rainbows” – whatever that means.

His main bombardment consists of the notion that we have the US to thank for this progress.

“Second is the increasing capability of the Iraqi security forces in Iraq.

“And third is the increasing cohesion, strength and unity of the 65-nation coalition that has come together to defeat Daesh.”

The problem with the colonel’s presentation from a propaganda point of view is that it is not very good. It is too blunt. People are more sophisticated than this – even people who spend a lot of time on the Daily Mail website.

Whether you like Putin or not, his decisiveness in Syria was a game-changer. After years of pretending to chase ISIS, the US was suddenly shown to have been merely simulating activity for entirely different ends.

Russia, on the other hand, went in to clean house and has worked effectively with the army of Syria to that end.

Any grown-up apportioning of credit which leaves out the key players discredits itself before it begins. It’s like trying to discuss ‘Gone with the Wind’ without reference to either Scarlett or Rhett.

Yet this is Colonel Warren’s approach. He simply disregards everything which doesn’t suit him: the fact that the US-led “coalition” has no legal mandate in Syria; that Assad is the democratically elected head of that country; that the US is engaged in destroying arbitrarily and unilaterally (in fact, if not in name) yet another foreign state which has done it no harm; that – finally and emphatically – if the resolve of this group of US-sponsored terrorists is “beginning to crack”, it is thanks entirely to the efforts of the Syrian Army and the air support provided by the only outside country to have a legitimate role in Syria: Russia.

The colonel has a tough job on his hands. Too many people now understand that what is needed for the defeat of so-called Islamic State, is for the US government to cease providing it with arms and funding. They know that this chameleon-like organization only makes any sense when seen as an arm of US-Israeli policy; to Balkanise the Middle East and make it easier to control, and to facilitate the theft of their wealth by corporations; its secondary purpose – in combination with the efforts of men like George Soros – is to create the blowback needed to justify an invasion of Europe by an army of aggressive, unskilled young men in order to asset-strip it, drag it into chaos, and prevent what the US fears most: a new union built around a freer Germany co-joined with Russia.

Agents of US military ambitions such as the CIA have always created media outlets – or subverted existing ones – as part of propaganda wars against foreign countries. But two thorns appeared in the side of this policy in recent years.

Firstly, in a world connected by the internet, propaganda intended for foreign consumption routinely feeds back into the US arena, thereby falling foul of laws against the use of US tax dollars to conduct informational war against the taxpayers themselves.

Secondly, again in a world connected by the internet, US citizens are increasingly discovering uncomfortable truths about everything from 9/11 to banking and medical cartels. Thus, distrust of government internally is a growing problem for those tasked with managing the population.

As ForeignPolicy.com notes, the philosophical foundation for the policy of not using US tax dollars to propagandize US citizens was to maintain a distinction between the US and the Soviet Union.

Happily for those burdened by such concerns, the Soviet Union is no more, and in 2013 the US removed the last fig leaf of pretense that the US government did not engage in propaganda internally.

This makes everything simpler. The war propaganda machine can lump the US citizenry together with everyone else and get on with the job of bringing – or keeping – everyone on board with whatever the Pentagon’s masters wish it to do.

In a war scenario – and the US is almost always making war on someone – budgets extend and keep the military industrial complex making more for its shareholders.

The guiding principle of those who get the government contracts which collectively make wars happen is to ensure that the last penny gets spent so that the same amount – or preferably more – will be forthcoming in the next financial period.

The US military, then, is a huge state-run business in the form of a bureaucratic and accounting machine tasked with blowing things up as a function of securing funding. It manages to kill a lot of people, but it is a blunt if heavy instrument. It was described to me by a friend – then himself serving in US Army Intelligence – as “the Post Office with bombs”.

Like any large organization it works on a system of protocols. There will be a manual somewhere which tells you what a nail is, what a hammer is, and how the two are to be used together. Then – in the context of the US military – there will be a Halliburton contract for huge numbers of hammers and nails, and a general somewhere with shares in Halliburton who will find a use for both.

In the view of military planners, then, propaganda is just another hammer.

Recent figures are conspicuously hard to find, but Fox News reported back in 2009 that the Pentagon was spending $4.7 billion annually on what it calls “the human terrain” of world public opinion, employing an army of 27,000 whose sole mission was the promotion of US military objectives via media.

What the numbers are today, we can only guess. But it won’t be less – because it never is.

Planners of military propaganda will allocate their budgets the same as any public relations company. That is, they will focus on predetermined demographics and opinion leaders – endlessly testing and measuring to see what is working, what not – and using the data thus generated to provide the engine for new, expensive proposals to the client.

The delivery method – or ‘tactic’ to use public-relations speak – which Colonel Warren employed this week has become almost hackneyed through over-use. It is to claim the narrative as fully owned; to assume the conclusions one wishes to see as given; to deny the existence of either the legitimate claims – or participation – of any party or view but those which suit one’s agenda.

While many consumers of propaganda may not understand this model intellectually, increasing numbers recognize it viscerally. They have an intuitive appreciation of the genre, having been exposed to it many thousands of times. The state of Israel uses it to exclude the Palestinians from any debate about their own land; corporations use it to achieve and maintain monopolies; governments use it to keep people paying income tax. Subconsciously, the model is associated with various forms of oppression and tyranny.

This hammer-and-nail school of propaganda has its roots in a vertical and uniform, pre-internet informational model. The model today is broad and disparate; people can shop for opinions.

The colonel’s activities this week will have helped eat some small part of the budget, but I would argue that this particular assault was a bad use of resources. It is too on-the-nose. It looks too much like what it is: a hammer.

And as people rumble the type of tactic employed above by the Pentagon, they tend to regard the source thereafter as unreliable on point of principle – not a good outcome if your goal is to cultivate “the human terrain” of world public opinion to your advantage.

Sam Gerrans is an English writer, translator, support counselor and activist. He also has professional backgrounds in media, strategic communications and technology. He is driven by commitment to ultimate meaning, and focused on authentic approaches to revelation and realpolitik. He is the founder of Quranite.com – where the Qur’an is explored on the basis of reason rather than tradition – and offers both individual language training and personal support and counseling online at SkypeTalking.com.