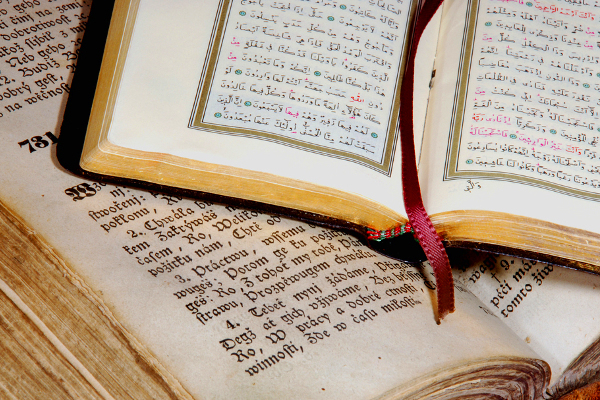 Christian missionaries are always interested in proving the superiority of the Christian Bible to the Qur’an. They say that the Old Testament and the New Testament are the true word of God: and the Qur’an is not. They try to prove this by asserting that when the Qur’an’s narratives differ from the Bible’s narratives about the same event; the Qur’an must be wrong.

It is sad that these missionaries, who claim to be the disciples of Prophet Jesus, ignore his teaching to love not only your neighbors, but also your enemies. They would reply that the search for God’s truth is so important that it justifies insulting other peoples prophets and sacred texts; even when they also teach monotheism.

These Christian missionaries are ignorant of, or simply reject, two very important Ahadith, that I, a Reform Rabbi who considers himself to be a Muslim Jew, always respect.

I am a Muslim Jew i.e. a faithful Jew submitting to the will of God, because I am a Reform Rabbi. (Reform Jews are now the largest of the Jewish denominations in the U.S. In the U.K..Reform Judaism is called Liberal Judaism.)

As a Rabbi I am faithful to the covenant that God made with Abraham, the first Muslim Jew, and I submit to be bound by the covenant and commandments that God made with the people of Israel at Mount Sinai. As a Reform Rabbi I believe that Rabbis should modify Jewish traditions to prevent them from making religion too hard to practice.

This is an important teaching in the Qur’an (7:157) and one that prophet Muhammad taught 12 centuries before the rise of Reform Judaism in the early 19th century. As Abu Huraira related: The Prophet said, “Religion is very easy and whoever overburdens himself in his religion will not be able to continue in that way. So you should not be extremists, but try to be near to perfection and receive the good tidings that you will be rewarded.” (Bukhari book 2 #38)

The two Ahadith that every Christian missionary should learn and abide by, teach respect for the Sacred Scripture and the Prophets of other monotheistic religions. A hadîth Narrated by Abu Huraira says, “The people of the Book used to read the Torah in Hebrew and then explain it in Arabic to the Muslims. Allah’s Apostle said (to the Muslims). “Do not believe the people of the Book, nor disbelieve them, but say, ‘We believe in Allah, and whatever is revealed to us, and whatever is revealed to you.’ ” (Bukhari book 92 #460 and book 93 #632)

Following Muhammad’s teaching I too neither believe nor disbelieve in the Qur’an. I do respect the Qur’an very much as a kindred revelation, first given to a kindred people, in a kindred language. In fact, the Arab people, the Arab language and Muslim theology are closer to my own people, language and theology than that of any other on earth.

Islam teaches clearly that God does not have just one people or one true religion. Rather, God chose not to create human beings as one nation or with only one religion so that each religion could compete with all the others in order to see which religion produces the highest percentage of moral and loving people; and which people best embody in their personal and communal lives the moral teachings of their prophet.

As it is written in the Qur’an [5.48] “For every one of you did We appoint a law and a way. If Allah had pleased He would have made you one people, but (He didn’t) that He might test you in what He gave you. Therefore compete with one another to hasten to virtuous deeds; for all return to Allah, so He will let you know that in which you differed.”

This is a wonderful further development of the teaching of the Biblical prophet Micah (4:5) that in the end of days (the Messianic Age), “All people will walk, each in the name of their own God, and we shall walk in the name of the Lord our God forever.”

In terms of respect for the prophets of other religions I have not seen the equal of the following hadith: Narrated Abu Huraira: Two persons, a Muslim and a Jew, quarreled. The Muslim said, “By Him Who gave Muhammad superiority over all the people! The Jew said, “By Him Who gave Moses superiority over all the people!” At that the Muslim raised his hand and slapped the Jew on the face.’

I will be the first to gain consciousness, and I will see Moses standing and holding the side of the Throne (of Allah). I will not know whether (Moses) had also fallen unconscious and got up before me, or Allah has exempted him from that stroke.” (Bukhari book 76 #524)

All the people of the book; Jews, Christians and Muslims alike, should learn humility from this profound teaching of Prophet Muhammad.”

Editor’s note: It is certainly true that Islam does not teach that salvation in the next world is confined to a particular ethnic group or label of religious affiliation, rather salvation is for those who “have faith and work righteousness”. Yet we must clarify that the orthodox Sunni understanding of the teachings in the Quran and Sunnah is that true faith entails accepting what Allah has revealed on His own terms which entails for people of faith after the advent of Prophet Muhammad (pbuh) that they believe, based on integrity and proof, in what the Prophet Muhammad (pbuh) taught. Human beings of any race or creed who stubbornly reject the prophet-hood of Prophet Muhammad or any previous prophet are guilty of disbelief. That is the orthodox Sunni position. Please see this for further clarification.