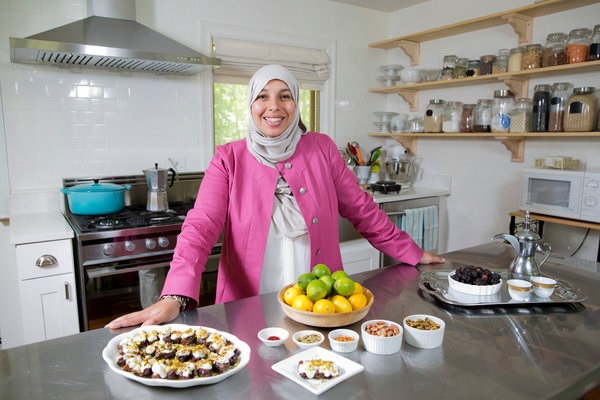 To say that the Daily Herald’s cook of the week, Yvonne Maffei, is “well-traveled” would be an understatement. Yvonne studied abroad while she was in college and has seen much of Europe, Morocco, Greece, Mexico, Central America and the Caribbean. Is it a surprise to learn that she loves ethnic cuisines?

“I went to all these different countries. I was there to study languages and literature, but I always wanted to find the food markets! By the time I came back, I had had so much good food — I wanted to cook all of it!”

As the daughter of an Italian father and Puerto Rican mother, Yvonne grew up in Ohio, with an affinity for good food. After graduating from Ohio University, she considered going to culinary school, but decided to get her master’s degree in International Studies instead. When she graduated, she considered culinary school again, but was too drawn to teaching English as a second language, and the exposure to multiple cultures it gave her.

“I had many Arab, Indian and Pakistan students — it felt like I was in a different country! The part that was the most interesting was that we would talk about foods quite a bit.” Often Yvonne wished she could find a way to combine her love of cultures, writing and cooking into a career.

Yvonne’s exposure to different cultures, study of religions and experiences with people, eventually led her to embrace Islam. The timing of her conversion, a month before Sept. 11, 2001, gave Yvonne a pivotal role in helping to bridge the understanding between her Christian friends, students and co-workers with the ideals of Islam.

“I had never been to those countries and I wasn’t political, so I didn’t feel prepared to explain that part of it. I went back to my comfort, I worked and I cooked. Food has always been the place where I explain myself.” Yvonne found herself researching the Halal way of cooking — the Muslim diet uses no pork or alcohol. Certified ‘Halal’ meat has been raised humanely and slaughtered in a process as painless as possible. The foods chosen are wholesome, organic and have as little additives or preservatives as possible.

Because Muslims come from all over the world, there is no one specific ethnic food for the religion. Yvonne found that her Muslim friends and acquaintances would often stick to one type of food, only because they weren’t sure how to translate Halal cooking into various ethnic foods.

“I found myself saying, ‘Hey everybody, here is some really good food, let me make you something Mexican!” Yvonne transformed several recipes; for example, her Italian lamb stew which she shares with us today, steeps lamb in a flavorful tomato sauce, made rich with peppers, onions and garlic, until tender. She also devised a useful substitution list of ingredients.

One day her husband asked her, “Are you writing this all down? Why don’t you write a blog?”

“I said, ‘what’s a blog?'” Yvonne laughs. Yvonne stopped teaching and MyHalalKitchen.com was born. She had found a way to combine her passions.

“It has spiraled. The technical stuff was the hardest thing ever, but I’m not looking back, I’m forging a new path.” The site has a wealth of information about Halal foods; Yvonne has toured food processing facilities, farms and talked to many people in the food industry. It is also jam-packed with recipes from a multitude of cultures. Try her Chicken Tandoori Pizza, Mostaccioli and a dessert made with dates, all of which she shares with us today.

Yvonne says the website does not necessarily focus on the Islamic aspects of cooking, “I just want to talk about food,” explains Yvonne. “Food is a bridge to understanding. You can have people of all different religions at the table. When you cook for somebody, you’re inviting them into your life.”