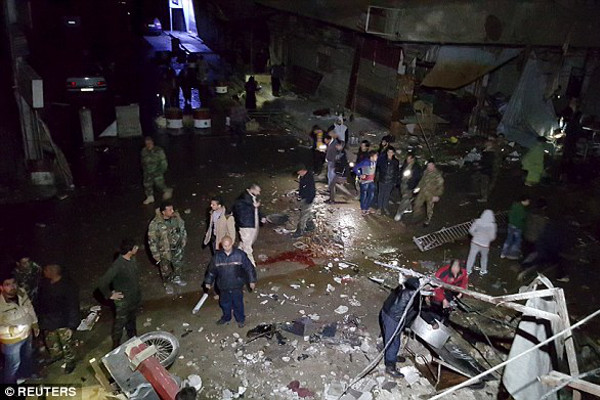 A series of explosions have rocked the Sayeda Zeinab district in the south of Syria’s capital Damascus. At least 83 people were killed and almost 200 injured when two suicide bombers reportedly struck crowds gathered in the area of the first blast.

The first massive explosion was a car bomb that targeted a busy school street during rush hour, Syrian state news agency SANA reported citing local authorities. The blast was followed by two explosions allegedly carried out by suicide bombers wearing explosive belts, and targeted the crowds gathered at the site of the tragedy.

The attacks claimed the lives of at least 83 people, according to local media, while at least 178 were injured, many of them severely.

A police source told RIA Novosti two of the suspected organizers of the blasts were detained by security forces in the Syrian capital, confirming that at least 80 people were killed in three explosions. Meanwhile, according to other reports, there could have been four blasts.

The Islamic State (IS, Daesh, formerly ISIS/ISIL) terror group has claimed responsibility for the bomb attacks in Damascus.

The terror group said two of its suicide bombers blew themselves up in the Sayeda Zeinab district after detonating a car bomb, the Amaq news agency, which supports IS, reported.

Earlier on Sunday, dozens of people were killed and injured in a double bombing attack in Homs. The local governor said that 34 people have died in the explosions, but RIA-Novosti cited a medical source, who said that at least 46 lives were lost, while 110 others were injured.

The Syrian Foreign Ministry said the bombing was aimed at derailing the ongoing peace talks between Damascus and rebel forces, and called on the UN Security Council to condemn the attack.

Bombings targeting civilians happen regularly in Syria, which has been riven by a five-year armed conflict.

IS claimed responsibility for a bombing in Homs last month, which killed at least 24 people. Another attack in December claimed 32 lives.