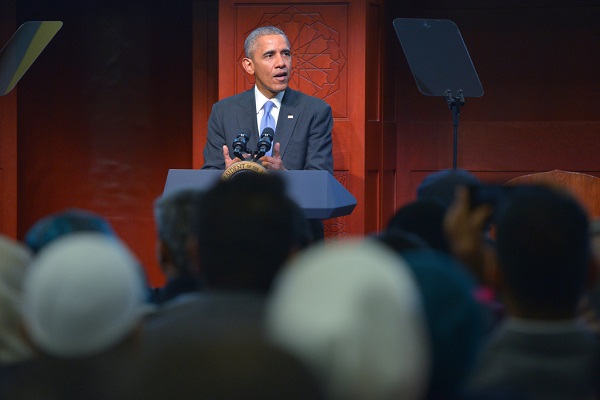 “We have to be consistent in condemning hateful rhetoric and violence against everyone, and that includes against Muslims here in the United States of America”.

Obama has criticized the increasing anti-Islamic sentiment in the USA before, implicitly calling out certain presidential candidates and recent comments from the 2016 campaign trail.

“The first thing I want to say is two words that Muslim Americans don’t hear…enough and that is, ‘thank you.’…Thank you…for helping keep us strong and united as one American family”.

In 2001, President George W. Bush had visited a mosque on Washington’s Embassy row just days after the 9/11 attacks, urging Americans to get back to everyday business and not turn against their Muslim neighbours.

Obama challenged Hollywood to start casting Muslims in roles “that are unrelated to national security”.

He goes on to say that there is a “distorted” view of Muslims in America due to unsafe rhetoric and that extremists should not be “legitimized” with rhetoric that calls them Muslims.

With no plans to ever again appear on a ballot, Obama faces less pressure to avoid political controversy, and seemed to relish the possibility that his visit would raise eyebrows among some of his most entrenched critics.

Shaikh said those radical Muslims are a small minority compared to the majority. But Obama saidWednesday that would give the organizations legitimacy. He also pointed out that Thomas Jeffersonwrote in the Virginia statute for religious freedom that the “Mohammedan” should have his faith protected in the United States.

It’s big news because it was the first time the president visited a mosque in the USA during his presidency,according to a BBC report. “So I was not the first”, he said.

“I know that in Muslim communities across our country this is a time of concern and, frankly, a time of some fear”.

In his final State of the Union address last month, Obama asked Americans to reject any politics that target people because of race or religion.