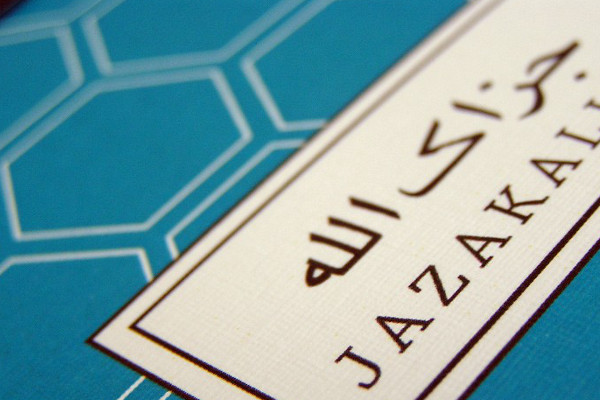 Question: Is “Jazākallāh” mentioned in any Hadith? Is there a Masnoon reply to it?

When someone does good to us, Islam encourages us to return the favour with good.

Allah Ta’ala rhetorically asks in the Qur’ān Majīd, “Is there any reward for good other than good.” (Surat Rahmān, 60)

The Messenger of Allah (peace be upon him) said, “Whoever is given something and can afford it, let him give something in return, and if he cannot afford it, let him express his appreciation for him, for if he expresses his appreciation for him, he is grateful to him, but whoever conceals it, he has shown ingratitude.” (Abu Dawud, #4813, The Book Of Etiquette, Chapter 11)

Therefore, we should try and return a favor with a gift, favor, or service. However, sometimes we are unable to repay a person in a similar manner, so the Messenger of Allah (peace be upon him) encouraged us to make Du’ā for that person:

“Whoever does some good to you, reciprocate it to him, but if you do not have the means to do so, then supplicate for him until you feel that you have reciprocated it.” (Abu Dawud, #1672)

One such Masnoon supplication is Jazākallāhu Khayrā which means, “May Allah reward you good.”

Sayyiduna Usāmah bin Zayd (Allah be pleased with him) reports that Nabi (peace be upon him) said, “Whoever says Jazākallāhu Khayrā to the one who has done good to him has certainly extolled him in praise.” (Sunan Tirmidhi, #2035, Chapter on Righteousness, Chapter 88; Sahih Ibn Hibbān, #3413, Vol.8, p.202)

No one can give a better reward than Allah Ta’ala, so we are asking Him to reward this person who has done good to us in a good manner. This is indeed a great means of showing gratitude.

Ibn Umar (Allah be pleased with them) said, “I was present with my father when he was wounded. People praised him and said, ‘Jazākallāhu Khayrā!’ He said, ‘I am hopeful (of Allah’s mercy) as well as afraid (of His wrath).’” (Muslim, #1823)

Umar (Allah be pleased with him) said, “If any of you knew what good there is in his statement “Jazākallāhu Khayrā” to his brother, they would say it more often to one another.” (Ibn Abi Shaibah in Musannaf, #27050, Book on Etiquettes, Chapter 190)

The Muhaddith Shaykh Muhammad Abasoomer said, “We were unable to locate a narration that has ‘Jazākallāhu‘ only (without the word ‘Khayrā‘). (hadithanswers.com)

Though it is better to say Jazākallāhu Khayrā as reported in the hadith, merely saying Jazākallāhu is also sufficient as it is accepted in Arabic – like any other language – that sometimes certain words (which are known to one and all) are omitted. So when we say ‘May Allah reward you’ (Jazākallāhu), we mean a ‘good’ reward (Khayrā). (See here)

From the above we would have realised that Jazākallāhu Khayrā is already a reply therefore there is no need for any further response.

Shaykh Muhammad Abasoomer said: “I haven’t come across any response in the hadith. Some people say: ‘Āmīn’ (O Allah accept) and others says: ‘Wa Iyyāk’ (same to you).”

Both make sense and will not be wrong, although they are not proven from the hadith. One should not consider these responses as Sunnah though.” (hadithanswer.com)

Unfortunately, some people have given this reply (“Āmīn” and “Wa Iyyāk”) a higher status than what the Shari’ah has afforded it. When a person says Jazākallāhu Khayrā to them, they wait to reply like how they wait to reply the one who sneezed and said al-Hamdulillah. If people consider a reply to Jazākallāhu Khayrā necessary or even Sunnah then this will be an innovation (Bid’ah) in Deen. The scholars have said [that] whenever a permissible act is considered Sunnah or Wājib [when it is actually not], then it becomes a Bid’ah (innovation).

Some people cite a narration from Sahih Ibn Hibban (#7279) in which the words: “Wa antum fa Jazākallāhu Khayrā.” According to Shaykh Abasoomer, this is a misinterpretation.

In actual fact Nabi (peace be upon him) was saying to them I should be telling you Jazākallāhu Khayrā instead of you telling me.

This explains why Nabi (peace be upon him) gave that particular reply. It does not mean that “wa antum fa Jazākallāhu Khayrā” is a standard reply to such a Du’ā. (hadithanswers.com)

Another narration that may give the impression that there is a masnūn reply to “Jazākallāhu Khayrā” is one collected by Imām Nasā’ī in ‘Amal al-Yawm wa al-Laylah (Hadith #303) that states:

The Messenger of Allah (peace be upon him) was gifted a sheep. He said, “Distribute it.” So when the servant returned, Aishah (Allah be pleased with her) asked: ‘What did they say to you?’ He replied: (They said): ‘May Allah bless you’ (Baarakallah). So ‘Ā’ishah (Allah be pleased with her) replied, “May Allah bless them. We repaid them what they said to us and kept our rewards with us.”

This cannot be used as evidence for a reply to Jazākallāhu Khayrā for a number of reasons.

If a reply was necessary then it would lead to an infinite cycle of responses, which means the person hearing the reply should also reply and then the next person should reply once more until infinity. This reply of ‘Ā’ishah (Allah be pleased with her) was not made in front of those who said “May Allah bless you.”

There are many instances recorded where Sahābah said Jazākallāhu Khayrā to one another but no report was found that states any reply, as pointed out by Shaykh Muhammad. We came across no hadith wherein the Messenger (peace be upon him) teaches of any reply.

In conclusion, Jazākallāhu Khayrā is already a reply to a good done upon a person so there is no need for further reply.

Note, the translation of Jazākallāhu Khayrā, which is “May Allah reward you good,” may also be used.